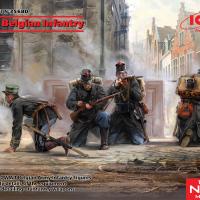 ICM has finally filled a big gap in their ongoing World War 1 Infantry series by releasing a set of early-war Belgian Infantry. Unlike most of the previous sets which displayed figures advancing toward an unseen enemy, this set displays Belgian infantry in what must be the most iconic fashion for the period depicted – fighting from a defensive position.

The set includes three infantry figures in the traditional shakos, all crouching or kneeling, two actively firing their rifles and one cocking or reloading his weapon. It also includes an officer figure armed with sword and pistol. The set includes two sprues of equipment suitable for Belgian infantry from 1914 all the way to 1918, when they wore khaki uniforms with helmets.

Speaking of equipment, the average modeler might find the supplied gear a bit confusing, so permit me to comment a bit on this. The Belgian Army of 1914 was a mostly volunteer affair and took its influence from two different sources. The uniforms were cut along almost the exact lines of the French uniform of the time, but the equipment was mostly German or German-influenced. Their rifles were German-made Mausers, and much of their personal gear was either German-made or influenced, which is quite noticeable with these figures, who have German-style backpacks, canteens, shovels, and other gear. Only the single cartridge box mounted at the front of the torso are strictly a Belgian design – one that would be dispensed with as the war dragged on.

In assembling the infantry figures, there inevitably will be a certain amount of putty work required, simply because of the complex drapery of the coats over the lower legs. This has been handled quite expertly in the molding, by the way. In addition, most of the arms come in multiple pieces to simplify the fitting of the rifles in firing mode. Patience is required to establish the poses correctly, but they certainly look good when completed.

The officer, on the other hand, is a bit of a disappointment, at least to me. His right hand, which is holding a diminutive pistol, is definitely undersize as is the pistol itself. I cut off the poorly-molded version and replaced it with the one from the equipment sprue, but it still didn’t look right. The molded straps for the sword and other gear are a also bit iffy – the sword mounts much higher on the body than it probably should, and the pistol holster also rides too high. If I was doing the figure over, I’d probably shave the straps off and remake them from lead strip to an appropriate length. As a final issue, the officer’s sword, which comes from the equipment sprue, is made up of two ill-fitting pieces which bear little resemblance to the cage hilt shown on the cover art.

Speaking of which, the equipment sprues will prove useful to anyone interested in Belgian infantry as they each include no less than three different mess kits, three regular rifles as well as a carbine, two different types of bayonet, late-war helmets, ammunition pouches and other useful bits. The officer’s sword, as noted before, is iffy, and despite including three rifles with separate bolts, only two bolts are actually provided on each sprue, which seems a bit odd.

Painting the figures is an interesting process, as there is a certain amount of debate about the correct colors. Although officially the coat was supposed to be black and the pants gray, in fact much of the stock in their inventory was French in origin, so that dark blue coats and pants ranging to light blue were not uncommon. About the only regret I have with this particular set is that they didn’t include the other distinctive Belgian infantry headpiece, which resembles a top hat with one brim turned up.

For my assembly, I replaced the pistol and right hand of the officer, but otherwise the only modifications I made to any of them was to add straps to the rifles. The end result is quite pleasing to my eyes, at least, and fills a real void in my collection. They’re going to look terrific fighting in front of my Minerva armored car model. Hats off to ICM for adding this lovely set to their continually amazing line of World War 1 figures, and thanks to IPMS/USA for letting me give these a try. Stay safe, everyone, and happy modeling!