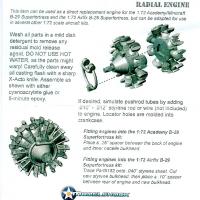 The Wright R-3350 twin row radial engine started its development cycle in 1937, and the engine first flew on an airplane in 1941. It was an eighteen cylinder radial engine originally rated at 2200 hp, but later models with fuel injection produced over 3600 hp. Used in the Boeing B-29 during the war, the turbo-compound version developed after the war was used in various types of airliners, including the Lockheed Constellation and the Douglas DC-7. More recently, these engines have powered Reno-type air racers, notably Hawker Sea Furys and Grumman F8F Bearcats.

Google lists many types of aircraft that used these engines, including many prototypes

This is a very basic resin cast kit, consisting of three major components, the two cylinder banks and an ignition ring. Each kit contains two ignition ring assemblies, as they are very delicate and they could break during cleanup. The cylinder banks need to be removed from the mounding frames and carefully trimmed up with a knife. They should be painted before final assembly. Superglue should be used to assemble the major parts.

The instructions mention the pushrod tubes, but these are not included. They can be easily made from plastic rod and attached with either superglue or white glue. One problem with the

Instructions is that no color information is provided. This is a point of confusion anyway, as when you Google Wright R-3350, you’ll get a profusion of photos of these engines in various states and conditions, and the colors vary from one photo to the next. The cylinders should probably be silver, as they usually weren’t painted, while the rocker arm housings were sometimes unpainted and sometimes black. This is also true about the pushrod tubes, so you’re on your own on those. I thought that the recommended .010 to .012” styrene rods were a bit too thin, so I uses .020”, which looks like the ones in the photos I have. The front of the crankcase and gearbox was usually a soft blue color similar to US Navy Intermediate Blue, which is what I use on American radial engines. After overhaul, they weren’t always repainted the same color, so if it is that big a deal, check your sources. In a B-29, you can’t see much of the engine anyway, as it is very close cowled, so there is probably no need to install pushrod tubes on the back cylinder bank unless you are going to leave the engine exposed. And if you are really masochistic, you can include the spark plug wiring.

This is a good product to use when you upgrade your Airfix or Academy B-29. However, remember that you will need 4 of them, unless you plan to do one opened cowling and three closed cowlings. I would think that more of these will be used to upgrade racing aircraft, such as the Bearcats and Sea Furys that used these engines at Reno. I don’t have an Academy engine to compare this to, but it is certainly more detailed than the Airfix engine. It’s worth getting if you want to superdetail a B-29, but installing the pushrod tubes will be time consuming.

Thanks to Dick Montgomery and Dave Morrissette for the chance to review this little gem, and to Mark Buchler for the review sample.

Comparison to base kit