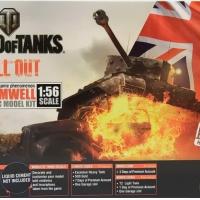 Italeri has recently begun producing a line of 1/56 scale AFVs and figures. This might be an unusual scale for most model builders, but is a fairly common wargaming scale equivalent to the 28mm scale. The Cromwell tank kit is one of their newest kits promoting the on-line video game, World of Tanks®. Italeri currently has four kits in 1/56 scale promoting World of Tanks®, the other three kits include the Pz. Kpfw VI Tiger, the Pz. Kpfw. V Panther, and the M4 Sherman.

This kit comes packaged in a side-opening box displaying a Cromwell tank crushing a burning car, with the British Union Jack flag in the background on one side, and a World of Tanks® logo proudly displayed on the other. This artwork is exactly the type of branding World of Tanks® does with their video game, and the result is very striking.

As an added bonus for World of Tanks® players, the kit includes promotional items for upgrades, and bonuses on the Xbox gaming console, or PC. These promotional items include a tank guide for the four tanks mentioned above, exclusive World of Tanks® decals, special invite codes and upgrades for the PC version of the game, as well as bonus codes for the Xbox version of the game. The kit’s painting instructions are specific to different tank camouflage patterns, or ‘skins’, available as World of Tanks® in-game upgrades. The decals provided with the kit include inscriptions and emblems available as tank upgrades exclusive to World of Tanks®. There are no painting instructions or decals for actual tanks that a model builder, or wargammer might prefer, and at 1/56 scale, getting accurately sized decals might be difficult.

The kit is molded in olive drab on two sprues containing 56 parts. The tracks provided are a top and bottom set, for easy assembly over the sprockets, road, and idler wheels. All of the tank wheels are molded to the side of the lower hull, again for ease of assembly. While a model builder might be disappointed in the lack of detail of the road wheels and suspension, they work well for a wargammer, and after assembly, look pretty nice.

The hull goes together very easily, and the kit has extremely minimal flash. The driver’s hatch can be molded open; however, the only figure provided is a tank commander, so a driver would need to be sourced elsewhere. The hull details are excellent, with a tow cable, and some pioneering tools molded to the chassis.

The one issue I had with assembling the kit has to do with Part 36, the driver’s hatch. The kit instructions show that Part 36 will cover the entire hatch, or you can split the piece in in two if you’d like to model it open. In fact, Part 36 is only one piece of the hatch and doesn’t cover the entire opening by itself. Part 38, which is not mentioned in the instructions at all, is the second door for the driver’s hatch and combine with Part 36 completes the assembly. It’s not a huge mistake and when I saw the size of Part 36 then noticed Part 38 was not mentioned in the instructions at all, I realized there was an issue.

The Turret provides separate parts for all four sides. The turret is well-detailed for what was a blocky-looking tank design with rivets and hatches sticking out of each side. The main gun is provided as a single piece with an open muzzle brake for added realism. Like the driver’s hatch on the chassis, the commander’s hatch can be shown open, or closed, and an excellent commander half-figure is provided.

In a relatively short amount of time, the modeler will have a nicely detailed Cromwell. All in all, this was a fun little build. I like the 1/56 size, it is well detailed, and easier to assemble than a 1/72 scale kit. Although, I do play World of Tanks® on the Xbox, I found the lack of decal options for an actual tank to be a little disappointing. I can recommend this kit to all armor fans, but it will probably be better enjoyed by wargamers, or people who play, or would like to learn more about World of Tanks®.

Thanks to Italeri, Hobbico, and IPMS/USA for providing the review sample.

Completed with driver
Previous Next