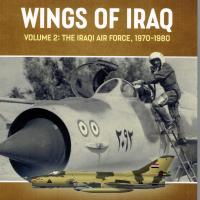 This book is Number 43 of the “Middle Est War” series. The book is divided into eight sections from the takeover of the BA’ATH party in July, 1968 through the Iranian conflict in 1980. Some of the chapters/sections are in turn subdivided into sections explaining the chapter better. As stated above the book contains 86 photos of which 34 are of specific IrAF personalities, with seven of squadron personnel and the rest (45) being of airplanes.

The first chapter talks about how the BA’ATH Party through a coup-d-etat took over control of the country. The second chapter explains the Arab-Israeli war of 1974/75. The next three chapters touch on three individuals: Dulaymin, Sh’bans and Saddam Hussein. The last chapter touches on the IrAF of 1980.

I found the book interesting as it explains all the teething problems the IrAF and the lessons learned from the conflict. One thing I was a bit disappointed was the large number of photos dealing with IrAF individual personalities. On the other hand I found some of the tables informative as they provided specific information with such things as the Order of Battle for 10/73, Operational Targets, and results of the attack. The number of IrAF commanders and their period of service are good examples of these tables.

I enjoyed the profiles , as well as the rest of the photos. I would like to thank Casemate and Helion & Company for the opportunity of reviewing this book.