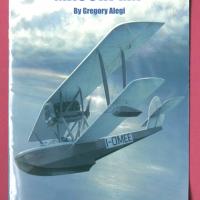 The name Macchi is often associated with flying boats and one of the reasons for that is the subject of Windsock Datafile No.162. The Macchi M.7 was one of the most successful biplane flying boat designs to come out of WWI and it enjoyed a phenomenally lengthy and active career from its introduction in 1918 well into the mid-1930s. Serving with other nations in the post-WWI years, examples of this speedy flying boat were also entered into Schneider Trophy races. Noted Italian aero historian and researcher Gregory Alegi presents the full story of this classic Italian Flying boat in this final Datafile for 2013.

Both M.7 and M.7ter versions are fully described in DATAFILE No.162 with many references to its predecessor, the M.5. Author Alegi’s new monograph contains over 70 rare archive photos of everything from the prototype in 1917 to an aircraft still in service in 1933. Added to this are seven color photos of various details of a rare survivor currently undergoing restoration in Sweden. Draftsman Marty Digmayer provides 1:48 and 1:72 scale drawings for each type and Ronny Bar offers up six highly diverse and colorful profiles to illustrate the M.7 in various livery applied to Italian and Swedish aircraft. To ice the cake, a number of original technical drawing are included and this latest Datafile is adorned with a stirring front cover painting by artist Roberto Zanella of M.7 I-OMEE banking over the Adriatic on a peaceful afternoon.

The M.7 (as well as predecessor M.5) was designed for service in the rather small and usually peaceful Adriatic Sea. This contributed directly to the rather elegant and peaceful lines of Macchi flying boats and their size. Originally conceived in 1917 as an improved variant of the M.5, the installation of the 250-hp Isotta Fraschini V6 engine and larger capacity fuel tank justified identifying the new aircraft as the M.7 and set the course for full-scale wartime production beginning in early 1918. Manufactured in ever increasing numbers in subsequent months, Nieuport-Macchi and secondary supplier Aeromaritima Italiana were in full-time production to meet military contracts for a total of 1085 aircraft. However, the operational use of the M.7 by Italy was limited to the final weeks of the war and the Armistice resulted in wartime contracts being reduced…cancelled would be a more accurate term. Manufacturing then continued at Nieuport-Macchi alone, with only eight more aircraft competed by February 1919. So attention was focused on export and non-military opportunities.

Export orders were slow in materializing with Brazil being the first customer to place four in service and Sweden following with four more aircraft (that actually may have been gifts from the Italian government). Post war orders from the subsequent Regia Aeronautica amounted to only 30 more aircraft, bringing total military production to about 142. Obviously, other customers were needed if manufacturing was to continue. To further its international sales campaign, Nieuport-Macchi entered aircraft in several sporting events and thus began the story of Macchi’s M.7 racing flying boats. During that period, modified designs were entered in racing events, including the famous Schneider Trophy races, with enough successes to firmly tie the name Macchi with that sport.

In 1924, the French partnership was dissolved and the company became Aeronautical Macchi. At that time management changes also brought about efforts to develop new flying boat designs to replace the M.7 and M.7ter, and attention was focused on utilizing the M.7 as a trainer. All of this and more is covered in this monograph. Model builders would be disappointed if a Datafile didn’t provide information on colors and markings…and, Datafile No.162 does not disappoint. The final chapter addresses this in detail and Ronny Bar’s color profiles add much to the descriptions. A bibliography and appendices conclude this monograph, providing production records, military serials and civil register information.

In this reviewer’s opinion, Windsock Datafile No 162 may prove to be the most complete source for documenting the story of the MACCHI M.7 for years to come. It is highly recommended. My thanks to Albatros Productions and IPMS/USA for the opportunity to review this excellent publication.

Inside Pages 2
Previous Next