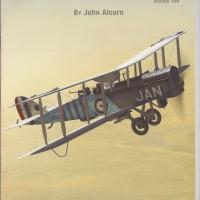 This is the second of two volumes dealing with the history of the DeHavilland DH-9A, and continues the story of the postwar development and service of this most versatile biplane. The first volume generated a lot of feedback, so a number of points are clarified, and more details are included, although the main thrust of this issue is the postwar service and development, as well as the Russian copies that were produced as the R-1 after the Bolshevik Revolution. Since there are a couple of kits available of this aircraft, at least in 1/72 scale, the book will be of special interest for those of us who model World War I and “Tween the Wars” airplanes.

There are a number of features in this book that make it a worthwhile addition to the library of anyone interested in aviation of the twenties and thirties. The photographs are especially well reproduced, and large enough so that the detail is obvious. Captions are very informative, and all photos are credited as to source. As in the first volume, there are eight pages devoted to color detail photos of the only surviving DH-9A, the one in the RAF Museum, and the account of this aircraft’s survival is an epic story in itself. In addition, several pages of original factory detail sketches are included, along with some excellent 1/48 scale three views and color profiles, and several maps showing the areas in which these airplanes operated. I would judge that the book consists of about eighty percent drawings and photos, and twenty percent text, but after finishing reading both volumes, I felt that I had a very thorough understanding of the role of the DH-9A in wartime and postwar service in the RAF.

If you have any interest in the DH-9A, both of these volumes will provide almost everything you will need to know about the aircraft for modeling or historical purposes. It is highly recommended, and be sure and get both volumes. Don’t miss out on this one.

Thanks to Albatros Productions and John Noack of IPMS/USA for the review copy.