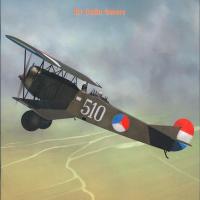 The subject of this Datafile may seem somewhat eclectic to model builders who don’t have access to a mainstream kit that matches the subject. But this publication fills a significant void in aviation research and documents the history of an aircraft that has been generally ignored by most model companies (although one limited run 1/72 resin kit is currently available from Omega. Datafile 140 will be of value to anyone willing to tackle a most interesting conversion of one of the many mainstream Fokker D VII kits however, as the C.1 was actually a stretched D VII.

Datafile 140 covers Anthony Fokker’s effort to produce a two-seat observation/reconnaissance aircraft for the Luftstreitkräfteand what transpired after it was not accepted for service by the Germans. Within this publication’s 40-pages Author Colin Owers does a good job of relating the story of how the C.1 was saved from fading away into certain obscurity. By smuggling at least 60 aircraft and a substantial amount of half-finished components out of Germany at the end of the war (by the train-load), Fokker was able to eventually continue manufacturing and marketing his unremarkable two-seater from a plant in the Netherlands. In subsequent chapters, the C.1 story continues, as the author documents its service in the Netherlands, Denmark, Russia, Spain and eventually the USA.

The well-researched story is enhanced by the inclusion of over 90 period photos, most of which are previously unpublished, airframe photos and a wealth of factory drawings and specifications. Detailed 1/72 and 1/48 plans by Martin Digmayer present all versions of the C.1, in both its Mercedes and Lynx powered versions and in both military and civilian passenger configurations (including a most unique contra-rotating prop version). Everything necessary for guiding a model builder interested in building a replica of a Fokker C.1 is included.

The front cover painting by artist Jerry Boucher portrays the C.1 in service in its intended role, and color profiles by the artist show the aircraft in three wartime and post-war schemes on the publication’s back cover. Who knows, maybe the colorful cover images and the comprehensive contents between the covers of Datafile 140 may be enough to interest one of the mainstream model companies to consider kitting this long overlooked aircraft sometime in the future.

Obviously, Windsock Datafile 140 is recommended. It may be ordered directly from Albatros Productions Ltd. at www.windsockdatafilespecials.co.uk