Windsock Centenary Special: The Last Flight of the L31 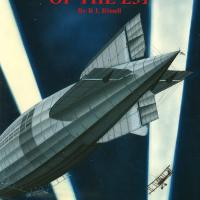 Ray Rimell is releasing a limited edition volume (1,000 individually numbered and signed copies) of the ‘true story of the Potters Bar Zeppelin’. A companion volume on ‘The Last Flight of the L31’ is being released simultaneously. The cover features a painting by Ray Rimell depicting 2/Lt. Wulstan Joseph Tempest firing into the hull of L31 on the night of October 1, 1916. Ronny Bar contributes a large color side profile of Tempest’s RAF Be2c 4577. I counted 56 photographs (including eleven in color) and a scale drawing of a ‘R’ Class Zeppelin 1916 of which L31 was the second example.

This is the long awaited follow-up to Ray Rimell’s The Last Flight of the L48 released back in 2006. This volume addresses the crash of L31 near Potters Bar in Middlesex on October 1, 1916. Ray Rimell opens up with a biography of Kapitanleutnant Heinrich Mathy, that follows Mathy through a series of Zeppelin commands until his final voyage as the commander of the L31. I like the usage of first-hand accounts and Rimell uses them to advantage. The aerial engagement where 2/Lt. Wulstan Joseph Tempest shot down L31 is well presented as well as the aftermath on the ground. One of the photos of shows the gruesome impression of one of the crew that jumped from the burning Zeppelin and it conjures a chilling reminder of the realities of war. A one page biography of 2/Lt. Wulstan Joseph Tempest is presented at the end. Interestingly, Tempest was awarded the DSO and promoted to commander of a night bombing unit, ending his career in fighters.

This is a engaging story that I am glad that Ray Rimell has finally completed and released. If you have any interest in WWI aviation, I wouldn’t wait on getting this book as, again, it is a numbered and autographed edition that is limited to a thousand copies.