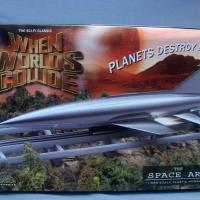 If you are old enough, you may remember a great science fiction movie in 1952 called “When Worlds Collide”. The story line was that astronomers have discovered a sun and a planet on a collision course with the planet Earth.

After a great deal of discussion it is decided to build an “Ark”, a large rocket, capable of evacuating the best minds of science, engineering, animal husbandry, farming and other “best and brightest” citizens of the planet Earth to a new planet, and there to start a new race in peace and harmony. As would be expected, chaos erupts at the last hour, caused by the unfortunate people who are to be left behind. The Ark is launched just in time to avoid the collision and proceeds to the new Earth, finding it a paradise.

Pegasus has released a model of the “Ark”. The scale is 1/350th which would make the 11 ½ inch model 335 plus feet long in prototype form. The kit consists of 26 pieces of very smooth light gray plastic. There are no decals or clear parts.

The model is designed as a snap together kit, and the fit is as near perfect as any I have seen in my own forty plus years as a modeler. The fit of the two fuselage halves is so well engineered that the seam is hard to find. The only putty used was at the point where the part was cut from the sprue, and along the base of the vertical stabilizer. ( see photos)To fill this area I placed 3-M blue tape alongside the area to be filled. I used Vallejo water based putty and pushed it into place with a spatula. After it had dried for about thirty minutes I removed the tape and wiped the excess filler off with a piece of cotton waste soaked in Denatured Alcohol. This way I didn’t leave any scratch marks on the plastic.

The kit includes a base and the launching track, about 14 inches long, which I painted to closely match the box art. The Ark was painted with thinned Flo-Quil Bright Silver, and then everything was sprayed with a generous application of Future Floor Wax.

Even though this kit is a snap tight kit, I chose to use liquid cement to make sure it stays together. Any young modeler could put this model together in five minutes after the parts are cut from the sprue. As I used glue and painted everything it took me about 5 to 6 hours. At this point let me say that I made one slight deviation from the kit plans, I used a metal straight pin for the pitot tube in the nose. I believe it looks more accurate.

This kit was a pure joy to build, paint and put on my shelves. I can recommend it for any modeler from the age eight years, with help from an adult when cutting the parts from the sprue. And of course old timers like me will enjoy it too.

In researching Pegasus on the Internet I find that they already have a nice range of sci-fi models as well as the $10.00 1/48 scale snap kits of our favorite WWII fighters.

I would like to thank Pegasus Models for providing this kit to the IPMS Reviewer Corps for review.