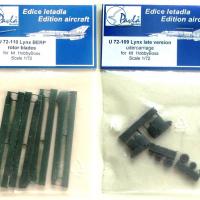 It was with great anticipation that I awaited the release of the Hobbyboss 1/72 Westland Lynx HAS.3. When it hit the street, I was not surprised to learn that it was a nice kit with some curious accuracy issues as this seems to be typical for this manufacturer. Pavla has addressed two of the major hiccups with these two resin sets and I jumped at the chance to incorporate them in my build for this review.

The first shortcoming addressed by the two sets reviewed here is the lack of BERP rotor blades applicable to this variant. The kit includes the older straight style on a separate sprue just for the rotor blades and this is particularly frustrating as other boxings of this kit have the correct BERP rotor blades – a simple mix up that should have been easily avoided. The second issue addressed in this review is more of a design flaw as the shape of the sponsons is inaccurate and simplified.

The replacement rotor blades come on a long casting block attached by four narrow cylindrical connections and a thin flash like layer. Detaching them is a very simple process that can be accomplished with sprue cutters and a #11 blade for cleanup. No sawing is needed. The blades have a few pinholes at the thin edge that I filled with some CA glue. The surface of the resin is a bit rough and required some light sanding and then a layer of Mr. Surfacer 1200 thinned with Mr. Color Thinner and airbrushed on. This left me with a smooth surface. Beyond these steps, using these parts is the same as using the kit parts. They fit on the rotor hub just as the kit parts are designed to be fitted. These replacement parts are quite simple to use with removal from the casting blocks and clean up being the only added chore. This is a nice, quick solution for a peculiar omission.

The undercarriage set includes replacement sponsons, wheels and scissor links for the rear landing gear. The wheels are deeper around the rims and more realistic in appearance. The scissor links are a bit more petite and accurate with holes in them for a better representation of the real thing. The replacement sponsons are the key feature of this set. They are an accurate representation of the later configuration with better detail. The float bags are represented with decals in the kit. The Pavla parts have a nice wrinkled surface to represent the float bags much more realistically.

The sponsons are connected to the casting blocks by small diameter cylinders just like the BERP rotor blades. They were detached with a couple of snips and cleaned up with a few swipes of a sanding stick. The wheels and scissor links were removed with a saw. The wheels had a pinhole or two to deal with and all of these parts had a rough finish like the BERP blades and were also given a coat of Mr. Surfacer 1200 to smooth things out. All of these parts took paint very nicely without the need for washing up with soap and water as sometimes suggested.

The sponsons fit into the slots on the kit fuselage as a direct replacement, but the fit was not completely flush and required some filling with CA glue. The scissor links on the kit parts were removed and replaced with the Pavla parts easily enough and the wheels were a simple swap out for the kit parts. One unpleasant surprise was that the holes through Pavla sponsons were not straight. The kit landing gear parts are intended to be slid through the holes in the kit sponsons which are straight. Doing this with the Pavla parts leaves the landing gear quite wonky. My solution was to take some measurements of the kit landing gear inside of the kit sponsons to see how long of a length came up on the top side of the sponson. I cut the kit landing gear in two and shortened the top part of the landing gear by 4mm. Then I simply glued the bottom piece of the landing gear on the bottom of the sponson and the top piece on top making sure they were straight up and down with the Mk. I eyeball. The result was satisfactory for my taste even though they two bits may be a hair misaligned between the top and bottom of the gear.

Overall I was very pleased with this replacement set. The resin is not of the highest quality, but just needed a bit of cleaning up and smoothing out to yield a good result. I would certainly recommend both sets to anyone building this kit to address the two most egregious errors in the base kit. My sincere thanks to Pavla and IPMS/USA for the review sample.

Kit parts (on sprue) vs Pavla parts (on casting blocks)