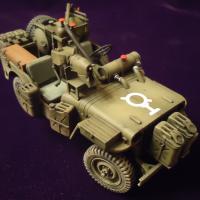 Meng sure does like to pop up now and then with the unique. This model is a case in point – a model of the single prototype flamethrower jeep developed for the British special services unit referred to as “Popski’s Private Army.” Why this particular concept didn’t take off isn’t really too hard to grasp. Imagine running around behind enemy lines in a completely unarmored vehicle with several gallons of extremely volatile fluids under pressure in tanks at your back. A single stray bullet could really ruin the crew’s entire day, I would think. The only effective way to survive a patrol in this contraption would be with the sincere hope that you have the element of surprise. Otherwise . . .

Meng has made a terrific little kit here of this one-off machine. The only non-styrene addition is the flexible tubing meant to attach the flamethrower gun to the fluid tank. Otherwise this is an extremely straight-forward and enjoyable single evening build.

I’ve been building a fair number of jeeps lately from various companies and must confess that the Meng basic jeep build is one of the easier and less fiddly version, as well as having really nice detail. This was one of the few times I could sit back, relax, and just let a model gently fall together.

There are a number of pieces that need to go together and have their seams sanded, these mostly consisting of the various tanks associated with the flame unit itself. The fit is quite good and with patience and care, no filling should be necessary.

The only real problem I encountered in the full build was with the vinyl tubing. The tubing itself was fine, but the locating pins were a far too fine diameter and did little to hold them in position once installed. Since these tubes have to describe some fairly pronounced curves, this presented a problem. If I was to do this model again, I would drill out and replace the pins on both the fuel tank and the flamethrower gun and install wire nubs in the appropriate diameter. I managed to get the system installed with a modest amount of aggravation, but this would simplify things a lot. Be warned.

Painting is pretty much a breeze, as most of the model is olive drab and that’s about it. I added all the color that was called for by simply brush painting and used a few different tones of drab to break up the look a bit. Restrained weathering was applied, as this was, after all, a prototype. Decals are provided for the instrument panels and also a rather cryptic icon for the jeep hood. I’m not sure where this latter item comes from as I could find no period pictures with it applied, but it broke up the drab scheme nicely so I added it anyway.

This vehicle would look charming with a figure of the driver standing next to it in typical SAS garb. This is a simple, pleasantly competent kit to assemble and goes together with a minimum of fuss. I completely enjoyed the build and would do it again in a flash. Heartily recommended!

My thanks to Meng Models for this unusual model and to IPMS/USA for the pleasure of throwing it together. Thanks!