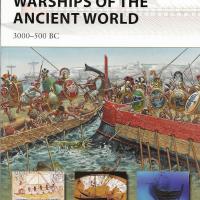 First off, I’d like to thank Osprey Publishing for offering this book up for review and to IPMS/USA for allowing me to do the review.

Many, many books have been written about the great warships of the two World Wars. The library shelves are full of stories about the great sailing ships as they traded and fought their way across the world’s oceans. However, not much has been written about the warships of the ancient world. That's simply because there's not much remaining in the way of artifacts to tell the story and very little remains of the written word of those times.

Adrian K. Wood, in his newly released book Warships of the Ancient World, tries to shed some light on this subject. He acknowledges the scarcity of verifiable resources and the confusion caused by sources that are thousands of years old. However, using what’s available, he makes an excellent case for the information he presents in his book.

The book is organized along chronological lines, beginning with the Egyptians in 3500BC and ending with the Greeks and Persians in 500BC. In between these two powers, Wood discusses the civilizations that traded, pirated, and fought along the coast of the Mediterranean Sea. He includes the Minoan Cretes, Syria, Phoenicia, and, of course, Greece.

There are a number of color profile line drawings that illustrate the various warship designs through the ages. Supplementing these drawings are several vivid paintings by Giuseppe Rava depicting ancient warships in close quarter battle. Scattered throughout the book are sketches and photographs of ancient objects of art upon which Wood relies in support of his text.

This is not a large book, but it is full of information related to the navies of the ancient world. The student of history will enjoy reading about the building techniques, the battles, and their resulting consequences. The modeler will find the drawings and paintings very useful in recreating some of the oldest fighting ships the world ever knew. It is easy for me to recommend this book for those reasons.

My thanks, again, go to Osprey Publishing and IPMS/USA.