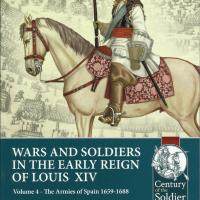 By the middle of the 17th century Spain held the largest empire the world had ever known – with territory spanning most of the New World to Italy and beyond. And yet, in an all-to-familiar tale, the enormous expense of maintaining such a long reach was prohibitive, and was quickly bankrupting the country. In addition, wealth was becoming concentrated into fewer and fewer hands, with nobility in one guise or another owning roughly 95% of all land in Spain. The monarchy was so strapped for funds that less than 20% of all taxes actually made it into the national treasury, most going to banks for loan debt, further enriching the elite at the expense of the nation.

France at the time was in an expansionist mood, dreaming of its own empire. Consequently, Louis XIV (the Sun King) and his advisors were constantly testing the fringes of the huge Spanish empire, making deals with their opponents and sometimes outright bribing nations to fall away. Border clashes were endemic, and would only get worse with time. War was becoming a way of life in a tumultuous age.

Bruno Mugnai has done a true scholar’s job of examining the milieu and this clash of empires in exquisite detail, demonstrated in the extensive footnotes found throughout this almost 400-page book. As only one of four volumes on the general subject, this has to represent a lifetime’s dedication to the field, and I sincerely doubt there are any other works on the subject as extensive. My father, who was a professor of history, would have loved this book.

I won’t lie, though – this approach makes for some pretty heavy reading. Most of the illustrations throughout the book are in black and white, and almost all feature various notables from the period as shown in portraits – faces that, for me, rather blurred together after a while. The only break from this is a set of 16 panels in the middle of the book featuring very fine artwork of the uniforms of the day in color. Like everything else in this volume, they are well researched and rich in interesting detail.

If you can plow through the details, you will nonetheless find yourself immersed in a time when two great empires vied for the world limelight with a combination of crafty diplomacy and outright aggression, often using proxies to fight the battles for them. In other words, this period reflects much of what is going on in the world to this day. It really does broaden one’s perspective on how little has changed in the way that nations contend with each other for dominance.

As for the avid modeler (versus the avid historian) this volume really doesn’t offer much that might enhance the hobby, with the exception of the color panels in the middle of the book. As stated before, this is mostly a scholarly political history, with little in the way of anecdotes or slice-of-life vignettes to enliven the layperson’s interest. As an amateur historian myself, I can admire the research and analysis that went into this book, but can’t really recommend it for the average figure modeler.

My thanks to Casemate for importing this interesting work and to IPMS/USA for a chance to read it. Happy modeling, everyone!