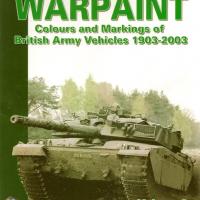 This is the third of four volumes of perhaps the most exhaustive and comprehensive study of British amour color and markings of the 20thCentury ever published. It’s been researched and compiled by Dick Taylor, a serving British officer who knows his subject up close and personal, who is also a modeler of the highest standing on the other side of the pond (the Atlantic). This volume is heavily illustrated with drawings of insignia, color side views and photos throughout. The three major sections are:

First, I should point out that this is not a “post WWII” volume that would hold little interest to WWII buffs. Mr. Taylor goes back to the origins of AOS and Formation Signs, including variations that appeared over the years. When there was “reason” for certain choices he states them, and makes it easy for a serious modeler to properly mark his military vehicles identifying insignias. Whereas the U.S. used a complicated geometric coding painted on vehicles in North Africa and Tunisia, say, that system was dropped entirely for a simplified number/letter bumper code system used ever since to identify a vehicle’s unit place within that unit. WWII Germany developed a complicated code of simple line drawings that identified units and the “Arm of Service” that unit was (i.e. AA, TD…). Britain’s AOS markings simplify (for those in the know) identifying the type of unit the vehicle belonged to, as well as identifies the exact unit it belonged to by its formation sign.

The Camouflage section begins Post WWII where Volume 2 left off. Olive Drab SCC15 remained the first few years before being replaced by gloss Deep Bronze Green (DBG). Mr. Taylor documents the orders that authorized changes as well as illustrates exceptions to the rules and trial schemes. How many of you are aware of the “tiger-stripe” schemes, distinctive jigsaw, snow camo and urban schemes? These are just a few of the schemes that we’re introduced to. Any modeler with only a slight post war interest will be enticed to build an accurate Korean War, Falklands, Balkans, Gulf, Kuwait and Iraq war vehicle. Britain had a presence in the Middle East before the end of WWII. You might even be enticed to build a bright red Warrior or yellow Spartan and now have photographic proof to back up your model.

The AOS symbols changed drastically in WWII. If you’ve modeled a WWII British military vehicle you may have noticed a square marking with a number overlaid. Sometimes the square is cut diagonally into two colors, sometimes it’s divided vertically or horizontally into two or three colors. This was not done on whim – every color, every division of that square identified a type of unit (solid blue square was Royal Engineers; the top half red, bottom half blue was Royal Artillery…) Extensive listings match up each unit with its AOS insignia. This system was officially phased out starting in 1978.

While the US WWII Armor Divisions had the simple armor triangle with the division number in the top, Britain’s system of identifying the Brigade, or Division, Corps, an Army and Army Group was more extensive and is covered here in ‘show and tell’ detail from their WWI origins forward. The author not only identifies the unit but identifies where they served. Whenever possible, period photos back up the text and drawings. These complete the balance of the book. By the way, though vehicle interiors are beyond the scope of this volume, Dick Taylor does point out that British interiors were painted aluminum with the exception of ambulances which had white interiors.

Now that plastic kit companies have rediscovered British Army vehicles to model, you can compare the decals they provide to the information in this book. For example, I just completed a Valentine tank in markings for the 23rd Armoured Brigade. The insignia sports a Black Liver Bird of Liverpool on a white background. This book shows four variations of style for the bird, one of which confirms that MiniArt did its homework and I can relax knowing that my model is correctly marked. I can’t tell you how many of Peter Brown's reviews (from the UK) I’ve read where the manufacturer provided a fabulous kit with false markings! In fact, every kit manufacturer of British tanks and AFVS should have this Warpaint series of books handy before they plan out their decal sheets.

This book is highly recommended for modelers interested in accurately modeling British Army Vehicles camouflage and markings from their inception. If you can afford the complete set of 4 volumes you will have the latest, most comprehensive references available. Available for $32.97 plus shipping and handling at Mushroom Model Publications, in the U.K. or their US distributor, MMD Squadron mailorder@squadron.com (972) 242-8663 or better shops in the US. Many thanks to Dr. Roger M. Wallsgrove, Editor-in-Chief at Mushroom Model Publications for the review copy. I hope the trend to continue to crank out new British and Commonwealth models in 1/72 and 1/35 scales has only just begun, as there are so many that were never done before or the example that exists is very out of date. Only now has a company like MiniArt finally produced a series of state of the art 1/35 Valentine tanks. It was the most widely produced British tank of WWII – a full 25% of all British tanks produced were Valentines. I’m not sure if there’s even one 1/72 Valentine available yet! Kudos to Dick Taylor and Mushroom Model Publications for giving us this comprehensive reference on British Warpaint!