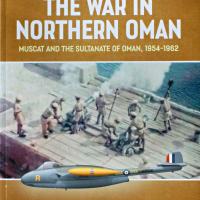 Oman is a country with a rich history of trading, and an ancient crossroads commanding the Straits of Hormuz. Over millennia, tensions between rival sects of Islam led to internal strife in Oman and surrounding areas, disrupting trade. To ensure their own financial benefits, different European countries set up the Sultanate of Oman to restore order, and traded places until the British occupied Oman and helped to quell a civil war. This book tells the complicated story of how conventional military operations were followed by civil development programs to unify disparate groups and hold a stale peace. Even though this book is thin, the pages are loaded with text that delves into the complicated events.

The author, Peter Shergold, is a former British infantry officer who fought in Afghanistan and Iraq. He was also a Loan Service Officer to the Sultan of Oman’s Armed Forces, and learned the intricate ways to wage war and peace in the Middle East. Peter tells it like it is – no post-revisionist malarkey. All the sides were to blame for senseless conflicts that could have been solved by a different application of attention.

This book is No. 34 of the Middle East @ War series, a part of the earth where wars seem ever-present and never-ending. This book covers the actions between 1954-1962. Dimensions are 11.7 X 8 ¼ inch (297 X 210 mm) and four mm thick. The book has Front and Back covers in color, and eight pages of color plates, photos and maps. Overall, there are 59 B&W photos, ten color photos, ten color plates, six maps and three Tables. The author has Romanified Arabic names, and writes with a scholarly tone that belies an unforgiving, tell-it-like-it-is approach to the real reasons for what happened.

The reader gets a quick education on how religion, geography, inhospitable terrain, backwardness, corruption, prestige, poverty, outside interference, tribes, but most of all, money, has plagued and still plagues Oman. Since the wars were based on geography, I looked into the boundary changes of states and their names on the Arabian peninsula so as to better understand the reasons for conflict. From 1905-1923, the southern coast of the Arabian peninsula was a jumble of around three dozen entities, most under British rule or protectorate. Boundaries between “countries” were indistinct and constantly shifting, as were the arid, sandy deserts. By 1935, most of the peninsula, including present-day Iraq, Israel, Jordan, Kuwait, Lebanon, Syria and Saudi Arabia, was the Kingdom of Arabia, composed of many emirates, with Aden and Sultanate of Oman the only other identifiable “countries.” After World War Two, British influence waned considerably, oil became big business, and by the time of this book (1955-1970) familiar countries today were established, including Muscat & Oman, Qatar, United Arab Emirates (Dubai and Abu Dhabi included), Saudi Arabia, Aden Protectorate and Yemen (which would later absorb Aden) in the south. Keep in mind that boundaries are still contested and likely will change again.

The reasons for the first actions are meticulously described and are mostly a power struggle between the aloof, distant and propped up by British power Sultan of Oman and the head Iman of the barren interior. Miscommunications and appearances abound to drive a rift between the neglected interior and the British interests supporting the Sultan. When the Iman broke away from Sultan’s rule, the meager Omani force was crushed by the Iman-led rebels with help from Egypt, Saudi Arabia and other Arab countries backed by US oil interests. Although relatively small numbers of people were involved in these actions, the importance of the outcome was disproportionate.

The response of the Sultan, er, UK, was to apply conventional warfare disguised as a Special Ops action to avoid world criticism. The crack SAS was sent to Oman along with British air power and transportation, and a revamped Omani force (still not an army). The SAS assault on the mountainous rebel stronghold was flawlessly executed, but the Omani forces allowed the leaders to escape to Saudi Arabia, where they continued to pester the Omanis with land mines and hit-and-run raids. The area was bombed back to before the Stone Age (it was already there to begin with) and precious irrigation disrupted. For comparatively small losses on each side, the rebellion was crushed, but not over.

The shift from military operations to civil development started after the rebellion was crushed, and the transfer of military might was shifted from UK units to indigenous Omani units, including many former British Empire transplants. The UK slowly backed out of Oman, but the Sultan continued to build his military and ignore civil developments, but enough was done to keep the rebellion underground. Incidents did occur, such as bombing of ships just after they left harbor, with losses of hundreds of lives, but the population was tired of supporting a crushed rebellion when they were becoming more prosperous.

Discovery of oil led to rapid development and civil projects (roads, airports, irrigation, schools, hospitals) that undercut popular support for the original Iman and the rebellion. Neighboring areas were consolidated into the countries when know today, and everyone enjoyed an economic boon from oil. The period after the years covered by this book (1954-1962) were also reported. The Sultan was overthrown by his son in 1970, who started reconciliation with the rebels, who also had their base of support from Saudia Arabia disappear, effectively transitioning from Oman from a smoldering rebellion to the population being loyal to the Sultan and enjoying the new economic prosperity. The moral to the story is that military action can quell outright rebellions, but if not followed by civil development and reconciliation or absorption, the original problem remains, holding back progress of an entire country into joining the world.

Thanks to the author for scrutiny of this overlooked military and unusual geopolitical event, Helion Books for publishing this history, and Casemate Publishers for getting this book to us. If anyone wonders about how the Arab world works, this book is a good starting point to unravel the thick web of layers of factors for human behavior in general, and how not to run a country. A satisfying if perplexing insight into a forgotten part of the world that helps explain many of the headlines and battles we have seen ourselves on the news.

The Messenger for the Wali of Iski, a rebel area of Oman in 1963. Note the ancient rifle and bare feet, illustrating how impoverished the rebels were

In 1964, camel trains were the common means of transportation of goods throughout Oman

Much of Oman borders Saudi Arabia, where the desert is called the Empty Quarter, inhospitable and difficult to traverse, but a hideout for rebels

Land Rovers were important transports for the British-backed Omani forces and proved valuable. This color photo was Desert Intelligence Officers on patrol in 1963

Ruins of the rebel stronghold of Jebel Akhdar, heavily bombed by aerial forces and assaulted and captured by British SAS units, effectively breaking the rebellion

Table listing the casualties of the war in Oman during the period of military operations (1956-1959). Note the small number of casualties on both sides that determined the destiny of a country
Previous Next