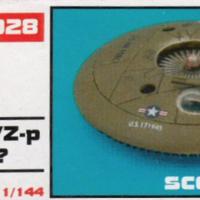 The VZ-9 Avrocar is marketed as a “what if” kit, but to my surprise there actually WERE two of these things built and “flown”.

The idea originated in the early 1950s as a U.S. Air Force project, built by AVRO Canada, for a high-speed, high performance fighter with high speed and maneuverability. The performance didn’t pan out, and the U.S. Army took over the project with the idea of having something like a high speed, highly maneuverable helicopter. The two prototypes were built in 1958 and 59. The project was abandoned in 1961.

One of the prototypes is on display at the US Air Force Museum at Wright-Patterson AFB, Dayton, Ohio.

For a more in-depth history, the Wikipedia page at https://en.wikipedia.org/wiki/Avro_Canada_VZ-9_Avrocar has a more complete look, as well as a very interesting photo of the prototype. The thing has a red line down the centerline, with US AIR FORCE on the left side, and US ARMY on the right side. If I had looked closely at this picture before I did the build, this is the one I would have chosen.

The kit consists of a resin fuselage, a resin gun, resin wheels, a PE fret for details and two vac-form canopies.

I cut the “fuselage” from the pour sprue. I had to do a little work with a sanding stick to clean up the edge, but it was fairly easy. The fuselage part is cleanly molded with no flash or bubbles.

I painted the interior of the cockpits 34151 US interior green, and then put pieces of cosmetic sponge in to prevent overspray while I painted the whole top OD (34087). The underside was done in Neutral Gray 36272. I painted the anti-glare panels flat black. The central fan was done with Testors Aluminum Metallizer, and the center of the fan was insignia red.

The seats are each one piece of PE. They were easy to fold and form (bend) to shape. The seat and seat back are bent to 90 degrees, then the sides of the seat back are formed to match the seat. There are two seat belts and a shoulder harness for each seat. I painted the seats 34079 Forest Green and the belts OD. I used white glue to hold the belts to the seat.

I put on the handholds in front of each of the cockpits. These are tiny PE parts, and were a pain to put on. White glue is my friend here. It allows the part to be adjusted much better than CA.

I put on the US Army decals because I wanted to use the gun provided. There is a little extension at the front of the gun, and I thought it might be for the “laser cannon” used on the “What If?” version.

I installed the wheels. They’re tiny, and I had to drill out the holes slightly to allow the parts to fit. Painted the wheels black and installed them. I then put on the canopy on the left side. According to the instructions, the right side didn’t have a canopy installed if the gun was used. And the last thing I did was install the gun.

This started out as a “sci-fi” project. I may go back and repaint the thing silver and do new decals, then remove the gun and install the second canopy to do the prototype. This was a simple build, and it taught me some little known US military aviation history.

I really like how the model turned out. It’s got a few difficult “small parts” points, but what 1/144 kit doesn’t?

Many thanks to Brengun for this kit, and to IPMS USA for the chance to build and review it.