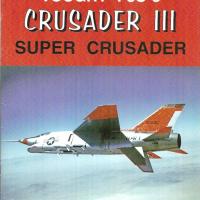 Crusader III (Naval Fighters # 87) is a paperback book measuring 8-1/2” X 11” and consists of 92 pages. The cover and pages are printed on polished paper. The book is full of sharp black and white photographs only with accompanying text. Also included are 3-view drawings, comparison tables, line drawings and performance charts.

The author begins by setting the stage for one of the closest aircraft selection competitions the Navy ever experienced. It began in 1953 when Vought’s F8U-1 Crusader beat out McDonnell’s entry for a high-performance day fighter. When the Navy went looking for an all-weather (night) fighter, the competition began.

Thompson states, “The Navy also preferred to deploy two different carrier-based fighters with complementary attributes…” In addition, having different fighters with different engines in a carrier group ensured a degree of safety in case one engine or aircraft type had a problem.

The Navy began the McDonnell F4H Phantom program in 1955. The Phantom design included two engines and a two-man crew. Adhering to its two-fighter philosophy, the Navy also contracted with Vought to build a single engine aircraft with similar performance characteristics to those required of the Phantom. Vought decided that the pilot was the only crewmember needed because of the advances in avionics and fire control systems.

Complicating this competition were the engine manufacturers. They were having problems developing engines to meet the envelope-stretching performance requirements for these two aircraft. The author interweaves their successes and failures with the development of the F8U-3.

About this time, the U.S. Congress became involved in military airplane program planning. They quickly decided that funding two different aircraft to perform the same mission was redundant and too costly to continue. They wanted only one aircraft, and forced to the Navy to make the selection. This becomes the driving force behind the intense competition between Vought and McDonnell. Once planned to be stable mates, the F8U-3 and the F4H were to become competitors.

It is with this backdrop that Mr. Thompson leads the reader through the F8U-3’s origin, development and several modifications. Through this entire process, the shadow of the F4H Phantom loomed overhead. We read about the modifications needed as flight-testing progresses. Many were due to the problems associated with the engines used. We read about the evaluation process as the Navy tries to select the best single aircraft for its purposes. The F8U-3 was easier to fly and could fly higher, faster, and farther and than the F4H. But alas, its single engine and single crewman were its downfall. The F4H won the competition because the Navy, pushed into a corner by Congress, ultimately liked the two engine, two-man crew concept.

In the last few pages, the author includes a brief discussion on modeling the F8U-3. He even includes a few black and white photographs of completed models.

For the aviation historian and enthusiast this book is an absorbing read. It would also be an excellent resource for the modeler. Unfortunately, there are only two or three resin kits and a vacuformed kit available. I found this book fascinating and give it two thumbs up.

My sincere thanks go to Ginter Books for providing this interesting book to IPMS/USA and to IPMS/USA for allowing me to review it.