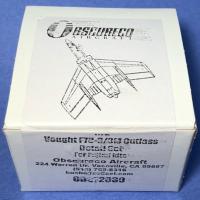 If you are looking to spruce up your 1/72 scale Fujimi F7U-3/3M Gutless, I mean Cutlass of course, look no further than Obscureco Aircraft and their release this year of a detail set for this plane. The set includes a cockpit, two different ejection seats, a replacement nose gear well, under canopy shelf, and canopy interior bulkhead. While I would recommend some experience with resin before using this set, everything fits well, and it is not too great of a challenge to add to your plane.

Chris Bucholtz should be a name familiar to my fellow IPMS-USA members as the Editor of our fine Journal, and he also runs Obscureco Aircraft, maker of resin detail items in 1/72, 1/48, and 1/32 scale. Finding a web page proved to be a challenge, but I have read that he has a Facebook page or can be reached at bucholtzc@aol.com. I previously purchased his 1/72 scale set for the Grumman A-6B variant and have been pleased with both products.

On opening the box, you will find two standard sheets of paper folded up providing the instructions for this set along with a total of 14 items attached to resin pour plugs/carriers. The cockpit parts consist of the tub, instrument panel, control column, rear bulkhead, early or late ejection seats, a headrest, face curtain assembly, and headrest armor. Additional parts include the nose gear bay, under canopy shelf, refueling probe, radar scope grouping, and canopy interior bulkhead.

I happened to have the 1988 Testors release of the 1/72 scale Fujimi Vought F7U-3 in my stash, and I am sure that it was excited to come out of the darkness of its basement storage for aid in this review. While I have not built up the plane for this review, I have test fit each of the items, and found no issues with the swap to these resin parts.

The Vought F7U Cutlass (often referred to as the Gutless) was a new tailless design first produced as the prototype F7U-1 in 1948 with the aircraft ending their service in 1959 with the production F7U-3 models. Problems started with the underpowered engines, which were upgraded in the dash 3 model, but the 20mm guns being located above the engine intakes caused compressor stalls when fired, and the tall nose gear also led to many accidents. Some 25% of the planes crashed leading to the loss of over 20 pilots from the protype through the production models.

My single biggest piece of advice is to carefully follow the instructions provided with this set. Chris provides very good information that includes some humor along the way. While the instructions provide color recommendations, I also looked at just about any photos I could find online to aid in painting and construction. I applied a base coat of Stynylrez Black to everything as my starting point. The floor of the cockpit and ejection seat then received Model Master Acryl Green Zinc Chromate, and the ejection seat curtain had Engine Gray applied to it. For this kit, I simply used my AK White pencil to bring out the details on the instrument panel and side panels.

My hits of the set are the improvements provided for the Fujimi kit, and the fact that the cockpit, nose gear bay, canopy interior bulkhead, and under canopy shelf all fit without issue. As the Cutlass was rather infamous, it is nice to see it getting some attention with this upgrade set.

My misses are very minor in nature. The instructions contain some black and white photos that are copies of copies, so I had difficulty figuring out where the face curtain assembly and headrest armor were supposed to attach. I ended up using online photos for assistance.

Overall, I would highly recommend this set to modelers wanting to upgrade the Fujimi F7U-3/3M Cutlass. As I stated previously, some experience with resin parts will be beneficial in making this an easier project to take on, but overall, it is not difficult.

I would like to thank Chris Bucholtz, the person behind Obscureco Aircraft, for providing this set to the IPMS-USA for review, to Phil Peterson, who runs the review corps, for allowing me to perform this review, and to you for taking the time to read my comments.