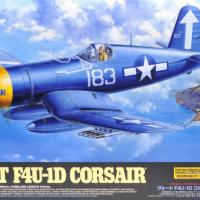 When I was a kid of about eleven living in Lincoln, Nebraska, I used to regularly visit one special park there. That's because not only did they have an open Sherman tank you could crawl around on, but a real live ex-Korean Corsair. I spent many a happy Saturday afternoon inside the cockpit or wandering over the wings of that aircraft, and ever since then I've had something of a love affair with this bent-wing beauty.

As a modeler, I translated this love into 1/32nd scale ever since high school. I've built the Revell kit too many times to mention, the 21st Century Toys version and the Trumpeter version. However, nothing I have ever seen compares to the quality of the Tamiya rendition of this bird.

So, what do you get for your money? Actually, quite a lot. Not only does this kit provide literally hundreds of parts on numerous finely-cast sprues, but it has two frames of really useful photoetch, rubber tires, a fat brochure on the history of the Corsair, a separate color guide for the decals, masks for the canopies, and even a small screwdriver if you decide to attach your finished piece to the included stand.

There is an industrial term first coined by the Japanese; Poka-Yoke. This term translates to "failure-proof" (or in my case "idiot-proof") and it means that your engineering is designed to prevent simple mistakes. Parts can fit one way, and one way only. This kit shows that Tamiya have taken this term to heart, as almost every piece of this extremely complex kit is designed to attach in only one possible manner, and to often literally click into place. Very impressive.

I encountered very few problems on general assembly, although I must caution that the fit of the parts is tight enough that a coat of paint can sometimes pose a problem. The first assembly is the cockpit area, and this includes literally every lever and switch, along with a host of other parts that will be quite invisible on the completed model. The instrument panels feature their own "glass" and decals which add immeasurably to the final look. About the only problem I encountered here was with the included photoetch seat belts. Although they are quite detailed, they are made of stainless steel, which means bending them into natural folds is rather challenging. Although I didn't use it, they include a detailed seated pilot figure which even features separate clear goggles.

The interior also includes a complete and detailed tail wheel bay assembly along with a choice of either the standard or extended tail wheel. Once again, most of this will be completely invisible once the model is assembled, but it's fascinating to build nonetheless.

When the fuselage comes together, it's interesting to note that a lot of the skin panels are separate inserts, vastly reducing the typical sand-and-fill of the average aircraft kit – in fact I only used a smidge of filler on the whole kit. The engine follows and is a complete assembly in its own right. Both open and closed engine cowls are provided, so you'll want to be sure to read the directions carefully as to what parts go to which. The same applies to the elevators, which feature different parts for mounting either in a straight or down position.

In fact, in general it's probably not a bad idea to comb through the instructions and clearly mark your various preferences before assembly. Although a major instruction sheet distinction is made between wings extended and wings folded, no such distinction is made for flaps up or down, and these parts cross a number of pages – such that in my eagerness I made a number of mistakes in assembly and had to go back and change the parts out before the glue set.

Separate parts are once again included for landing gear up or down, and a sturdy base in black plastic is provided in case you want to go with that option, although I don't honestly know why anyone would do so.

Overall, there are three areas where this kit stands out from all its predecessors – the cockpit detail, the lowered flaps and the folded wings. Although the Trumpeter version does offer lowered flaps and folded wings as one option, the detail isn't remotely as good as found in this kit. To put the flaps up and extend the wings means a goodly portion of this incredible detail is hidden, which would be a shame. As you can see from my build, I wanted to display all this gorgeous detail as much as possible. Although the kit provides removable panels for the engine, in this case they were an exceedingly tight fit and I elected to glue mine shut.

By the time you finish the flaps and the tail you're about ready for decaling, and you won't be disappointed. Although only two finishes are offered, both are of some of the more colorful options and the decals themselves are extensive and set with little or no silvering, even on a relatively flat-finished dark surface.

Rockets, bombs and drop tanks are all provided as external loads and certainly look the part – better than any I've ever seen before, in fact. Photoetch parts are used to add fuse propellers and rocket nozzles for even extra detail. A standing pilot figure is also provided to show along with the model and give it some scale.

About my only niggling disappointment with the kit is that unlike Trumpeter's version, they don't include open gun bays. However, the plethora of detail on everything else more than makes up for this modest deficit.

I genuinely don't think I could be more impressed with this kit than I am. Whether or not the additional quality and detail is worth the price tag is going to be up to the individual modeler and his/her wallet, but I've frankly never seen a model more impressively engineered in my 50 years of modeling. If you can afford it, it outshines every other rendition of this classic aircraft by a mile. My thanks to Tamiya for a chance to build this masterpiece, and to IPMS/USA for entrusting it to my fumbling fingers.