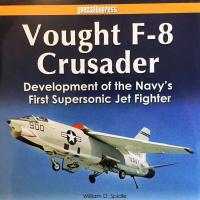 Thank you to Andrea Lindell of Specialty Press for providing a review copy of their new release, Vought F-8 Crusader, Development of the Navy’s First Supersonic Jet Fighter, by William D. Spidle. Specialty Press has sweetened the debut of this new book by providing an author-signed limited-edition of the book directly on their website or by calling 1-800-895-4385. As always, I appreciate all those in the IPMS Reviewer Corps, whose work is critical to sharing new and exciting modeling products with the world.

This book is not a description of operational and combat records of the F-8. It instead tells a seldom-detailed story of the nitty-gritty, fascinating process of bringing an unproven supersonic shipborne fighter concept to fruition, followed by an extensive service life. When the Crusader was being developed, the Chance Vought division of the United Aircraft Corporation was in somewhat desperate times, after a long and mostly famous production history of naval aircraft. This new book describes the successful transition and survival of Chance Vought through the lens of development, modification, and adaptions of all versions of the F-8. The author had access to the Vought Heritage Archives, and the fruits of this access are reflected in the details. The photographs and details are excellent, wrapped within an easy-to-read narrative.

Brief highlights of each chapter are included here.The prologue and lead-in materials to the main content are well organized.Familiar names in the naval aviation history world are acknowledged, as are many others who contributed.

Chapter 1 Wins, but Losses:Chance Vought had a number of wins and losses in aircraft design and production.The iconic F4U is the most well-known, but the TBY, F6U, and F7U designs all helped develop a research and corporate skill sets that allowed successful development of the F-8 (F8U).

Chapter 2 Navy Day Fighter Program:Operating a supersonic aircraft from a carrier deck today is somewhat routine, but in the early 1950’s, the idea was far from routine, with many challenges to be overcome.The specifications for a “day superiority fighter” and subsequent answers to the challenges represent ground-breaking work.I appreciate the timeline, testing and tweaking narratives, supplemented with excellent data tables and images.

Chapter 3 First Flights: The initial test flight results are chronicled in this chapter.There are numerous photographs of natural-metal-finish test aircraft.Some of the images have B-36s in the background at the Convair plant in Fort Worth, TX.

Chapter 4 F8U-1, The Crusade Begins: The next steps of further testing and carrier qualifications are covered in this chapter, with stark reminders of how dangerous test pilot work is.The demonstrator aircraft crashed due to left aileron failure, followed by control loss and airframe damage.The tragic death of a highly qualified pilot would not have been prevented by any escape system known at the time.Two other aircraft failed during flight testing, but the pilots successfully ejected.Many further improvements, such as an experimental escape system concept, armament, refueling, catapult and carrier landing suitability, culminated in acceptance by the Navy, and “payday” at Vought.

Chapter 5 Fleet Introduction and Record Flights:The F8U was deployed to flight status and the fleet, and participated in a number of record record-breaking flights and public displays after acceptance.Major/Senator John Glenn is featured in many of the narratives in this chapter.I enjoyed reading these sections about one of my long-time heroes.

Chapter 6: F8U-1T A Crusader Built for Two: This relatively brief chapter highlights the development of the F8U-1T, known as the Two-Sader.The design concept was for a training platform, but neither U. S Navy or foreign operators adopted the design.

Chapter 7: F8U-2 Improving the Breed:After the F8U-1 entered service, a series of upgrades began.Improved radar and improved missile armament gave the Crusader much increased capability and performance.The improvements were not without troubles, but eventually many different configurations were successfully developed.There is little reference to operational histories, but there is a wealth of information on the design sweat!

Chapter 8: F8U-3 A Super Crusader:Evolving Navy requirements spurred Vought’s interest in a more powerful and redesigned version of the Crusader.The new competitor was the F4H, better known as the Phantom.In spite of an enormous amount of work, the Super Crusader lost out to the McDonnell Phantom, whose two-engine, two-crew concept provided a slight edge in a close competition for the next USN fighter line.

Chapter 9 Modernization:If you have been perplexed by unfamiliar aircraft designations, this chapter helps. For example, the F8U-1 became the F-8A.Similarly, the McDonnell F4H became the F-4.Expansion of the Crusader’s mission roles into electronic counter measures and photo reconnaissance required additional features and upgrades.Older F-8A were improved and converted to different missions.A more powerful engine in the existing airframe required more surface area.The resulting F-8E truly has the looks of a shark, with its mouth-like intake, dorsal tail fin and smaller ventral fins projecting downwards.

Chapter 10 Paper Airplanes: This chapter’s content is unusual, with concepts for new designs that never took shape beyond the drafting table.Nonetheless, I found the theories, creativity, and critical thinking stories fascinating.One idea was to reconfigure the F-8 to a new shape to mimic a MiG-27 in an adversary role.

A very well-done epilogue rounds out the volume with many final disposition stories.I always find it a little sad to see aircraft left behind as science and engineering advance, so this wrap-up chapter is a welcome read for remembering the Crusader.I appreciate the useful endnotes for further research, followed by an easy-to-use index.

I absolutely recommend this volume, from both the scale-model and historical perspectives. I will also add that the scope of book, focusing on design and problem-solving rather than operational stories, is a refreshing perspective and a great companion to other literature on the Crusader.

Thanks again to Andrea at Specialty Press, you and your company’s work helps keep history alive. Author Spidle, you clearly put heart and soul into your book; that effort is very appreciated. Thank you again to the stalwart Reviewer Corps for your hard work in making these review opportunities happen, Go Team!