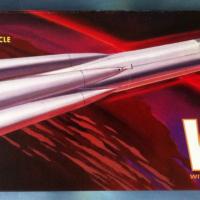 Last released in 1970 by MPC, Round2 has re-issued this classic kit. You may remember that the original MPC kit had parts for the flying version. I remember the cardboard tube for the central rocket cylinder used to hold a small rocket motor, thinking that the plastic parts would not survive more than just one launch. I never put that to the test and I still have that original 1970 MPC kit sitting in my display case.

The Round2 release does not have those parts for a flying model, although the launch rail brackets are still present. There are some other items still in the box from its “flying” days but they can be ignored.

During this project I did not fill seams and I did not conduct any research to achieve an accurate paint scheme. I sanded down the more obvious “steps” during assembly, and chose a very basic White/Gray paint scheme, painting some Vostok components to make them pop out a bit in the images accompanying this review.

Even after 44 years, the parts in the new Round2 issue are still fairly clear and crisp. It will be necessary to do a little sanding to remove some flash. The surface detail on all parts is crisp and sharp. I can look at the reaised detail on my original kit and that same detail can be seen on the new Round2 release.

The kit contains parts for two payload options. The first option is the ubiquitous Vostok capsule. The second option is for the historic Sputnik satellite. The kit is designed so that the two payloads are interchangeable.

Assembly is straight-forward and the instructions are clear and easy to follow. In most cases the “fit” is so good that I could do some basic assembly by press-fitting the parts. In fact, I did not separate those parts but went forward with construction. For those who are not familiar with the differences between the Vostok stack and the Sputnik stack, it is wise to spend just a minute or two studying the kit instruction.

Decals for both the Vostok and Sputnik options are included. This presents a little bit of a problem. While the payloads are interchangeable, the decals are not. It is possible to put the Vostok decals on one side of the launch vehicle and the Sputnik decals on the other.

One does not see too many of the original MPC kits on Vendor tables, so this kit will fill that much needed “Russian” gap in the collection of most Space aficionados. The whole project can be started and finished over a weekend. The model is easy to assemble and would be a good “entry” model for those who are interested in rocket models. Thanks to Round2 for providing this item to IPMS/USA for review.