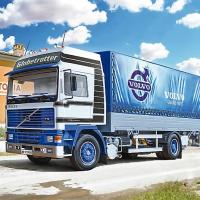 The Volvo F16 Globetrotter has been a commercial success since its 1988 introduction. The basic design has been re-configured into several different models ranging from a towing tractor (with a single axle, rear end), an XL version with a sleeper cab, and a reefer truck, among others. The F16 Globetrotter has been replaced in the Volvo inventory with the upgraded FH / FH XL series. (There is an XXL series but that may just be a shirt size. :)

As is the case with the real Volvo Motor Company, Italeri has also been manufacturing some excellent truck models. They have available all of the aforementioned trucks in 1/24th scale. Just such a truck model is the subject of this missive, the Volvo F16 Globetrotter Canvas Truck. This canvas (or curtain) sided truck model includes an elevator, although in the U.S. it is often referred to as a lift gate. This type of vehicle is also referred to as a 'straight truck' owing to it having a single frame running the length of the truck. [ Fun Fact: Straight trucks are also known as box trucks, cube vans, or my favorite, a rolling toaster.]

The model is molded in several colors of styrene. The black parts are mostly for the drive train (chassis, axles., etc.) with white being used for the exterior parts of the driver’s cab. Wheel hubs and several external support frames as well as some bits for the engine exhaust and are molded in silver plasticine. The light gray bits are designated for the interior of the drivers cab and the elevator assembly. Dark gray plastic comes into play with the 'toaster' (cargo box) portion of the truck. Dark blue plastic is used for the sides and end pieces of the main body of the cargo section. (I suppose one could build this without much in the way of painting.)

Lest I forget, there are seven black vinyl tires which have nice tread and raised sidewall details. The only finishing I did to those tires was to spray them with clear flat and apply a gray wash. Those wheels have molded on value stems, a great plus. There are a number of parts (complete set of wheel hubs and rims, cab mounted wind deflector. etc.) that are not meant for this variant of the Volvo F16 Globetrotter, all of which are noted in the assembly instructions. So, extra bits for the spares stash.... Italeri has also included a fret of clear parts for the windscreen and windows.

The frame is the first thing to tackle as you build this kit. Specifically, you need to cut the two frame rails apart and reassemble them into one. Don't freak out! Italeri has thoughtfully provided a detailed diagram of the sections of the frame that need to be removed. If that diagram does not work for you the parts are scored at the proper locations. You may wish to reinforce those joints. Italeri has provided some additional bits of styrene just for that purpose. Having said all that you are gonna want to get this right, otherwise the frame rails may end up being different lengths and nobody wants that.... Case in point is some fit issues I had with a tread plate (# part 78Bb) in a latter step.

Italeri includes a nicely detailed engine and as this a cab-over-engine model that engine is going to be partially visible when you are finished. The drivers cab can be tilted forward to show off the engine compartment. After adding various cross members and air tanks between the frame rails it is on to the front suspension. The front suspension is operable so be careful with the assembly and don't forget to break out a 'heated screwdriver' to 'melt ' some of the movable parts (tie rods and such) into place. Old school, baby!

Additional parts are used to construct the rear axle with detailed air brake assemblies, shocks, anti-sway bar and drive shaft. Because the frame was shortened, the drive shaft will also require some surgery to fit properly. That part, on my example, was faintly marked but marked, nevertheless. A diagram is included for those whose structural visualization skills may be in decline. [ Structural Visualization is the ability to think in three dimensions.] See! Building scale models is an educational pursuit. :) After adding fuel tanks, wheel fenders, battery boxes and other accouterments and the chassis is complete. All of this stuff and the underside of the drivers' cab was sprayed with Tamiya NATO black.

Modern truck interiors are anything but spartan these days. Most of the conveniences (cup holders, display screens, communications devices, etc.) you can find in modern automobiles and pick-up trucks are also available in commercial truck cabs. This kit from Italeri is no exception. Many of those details are included with this kit. Seats (of course and at no extra charge), shift levers, accelerator/brake pedals, detailed steering wheel/column, seat height adjusters, etc. all as distinct parts. But alas, no floor mats. On the plus side there is texture (scuff pads) molded into the floor on the driver and passenger sides.

Constructing the drivers cab exterior and interior may be a bit different from that which you are familiar from other manufacturers (AMT, Revell, etc.). Italeri presents the driver’s office and cab exteriors as separate assemblies. The completed interior is assembled as is the exterior shell of the cab. The interior assembly is inserted into the completed cab...not unlike a Russian nesting doll. It does make painting those components way easier.

Additional details can be added to the interior and the level of detail is, of course, up to the individual. The only embellishment I did to the interior was some upholstery accents to the seating, side consoles, and stowed rest /sleeping pad at the rear of the cab. This was accomplished by cutting out various shapes of printed paper (look in the scrap booking isle) from a craft store. Or you could print your own from an 'enter-web' image. The shapes were applied with white glue. Decals are provided for the driver’s instrument console and the shiny part of the rear view mirrors. All of the decals look great and went on with ease.

When constructing the cargo box (aka 'toaster') you have the option of whether or not to use the elevator (lift gate). But as you probably got this kit for the elevator maybe this may be a moot point? Although after tackling assembly of the parts for that elevator you may wish that you had selected another option. More on that later.

Italeri has thoughtfully provided tie-down ratchets along the exterior of the cargo box. The molded canvas sides of the cargo box were covered with Tamiya masking tape in an attempt to give the plastic t more of a canvas texture. That was sprayed with Pearl Blue from a rattle can. It sort of works at replicating the 'canvas look', Solartex or Monocote might be better options.

Italeri, has you attach the completed cargo box to the frame with the proviso that you should first attach some reinforcement bits (provided by you) to the floor of the box so that it will fit properly. Seems that the width of the sub-frame on the cargo box is narrower than the width on the chassis frame. (?) That gap is about one millimeter either side so some Evergreen strips (or reasonable facsimile) will aid in fixing that issue.

During this step you will need to place the side guard rails (side impact bracing) on either side of the cargo box. The mounting braces and guards (parts # 88N, 89N, 90N, 91N) need modification. The amount of material that is suggested to be removed from those parts may be in error. If you remove the recommended amount from the mounting struts will be too short to be of any use. Best to use your own discretion when tackling this step. You know, measure once, cut twice. Or something like that.

Constructing the elevator is next. This was a fiddly build for me and did give me pause as to whether or not this truck model really needed an elevator. The assembly illustration seemed overly crowded with parts and it took me a moment to get the idea of what, went, where. My solution was to attach all the non-moving parts first and then attach the movable bits (air pistons, etc.) one by one. It did all come together at the end. The main attachment points between the elevator floor and the lifting apparatus snap into place, which helped immensely.

One aspect when using 'with the elevator option', it is suggested that you use the abbreviated rear top plate for the cargo box (part# 94L). If you use the more traditional piece (part # 222M) you may need to modify that part in order for the assembly to work satisfactorily. Note the image showing that modified part (cut outs for the lifting mechanism) and the elimination of the tie-down brackets. I chose to use the more traditional piece and did not have an issue. The cutouts on the rear plate for the lifting mechanism do look cooler.

One thing that wasn't much help are the placement guide(s) for this completed assembly as well as the rear end crash bumpers. The position on the truck frame for the mounting brackets for the elevator are shown as 'sort of in this area'. This is a good place for some real world images, but I couldn't find any with enough detail to be of much help. The instruction illustration could have been a bit more explicit on where to place those brackets, but I eventually placed them just forward of a molded detail on the frame rails. And the whole thing does look pretty cool in the end.

The brackets for the rear crash bumpers also gave me some pause. I did wind up placing those brackets flush with the end of the rear frame. The 'outrigger' crash bumpers (parts # 89/90 L) attach to the bottom of the cargo box.

Despite some of the slight misgivings mentioned about this kit I found it delightful and comparatively easy to build. The method that Italeri uses with their cab interior/exterior construction was new to me and I think I prefer that approach. This was my first Italeri manufactured truck model and as such may have contributed to the fit issues I encountered but now that I know what I know I'll have an easier time with the next one. But maybe san elevator! :)

My thanks to Model Rectifier Corporation and IPMS/USA for the review copy.

P.S. There really is one glaring error with this kit that might put you off purchasing one and for which I feel duty bound to point out: Italeri only includes the back half of a small Michelin Man statue and not the entire thing. But in their defense, it was a neat easter egg. All of which has sent me on a search for their kit that does have both halves of that iconic mascot. #wheresmymichelinman