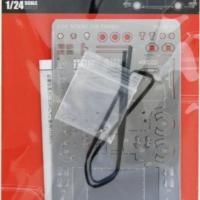 In 1982 the Federation International de ’L’Automobile (FIA) developed Group A requirements to allow manufactures and individuals to race production model cars. In order to qualify, a process called “homologation”, the manufactures had to build 2500 or 5000 cars or under “evolution” rules 500 cars which after inspection and approval qualified the cars to race. The subject of this review qualified under the Evolution, Group A rules by building 500 Volvo 240Ts. An interesting note is that 477 of those cars were stripped of competition equipment and sold as standard Volvo 240 turbos. In order to requalify, Volvo had to identify those 500 owners! Drama aside, the Volvo 240T turned out be a winning platform. Powered by a 340hp, 2.1-liter, intercooled turbo with water injection and weighing in at 2200lbs, these cars were real competitors against BMWs and Austins in its class. This kit replicates the two winning Volvo 240Ts run at the Hockenheim racetrack (about an hour and a half northwest of Stuttgart) in 1986. Volvo won the European Touring Car Championship (ETCC) that same year.

The injected parts come molded in white, black, clear and chrome. There are poly caps to mount the tires and a nice decal sheet. All of the parts are first rate quality. Highlights include open an open grill and sharply molded details. Seat harnesses are included as decals in the base kit.

No real issues as the parts fit exactly as they should after cleaning up mold seams. Careful masking and painting will give great results. The body is molded in white, so I just primed it white and finished that with Tamiya pure white with a little blue added. I intentionally did not polish it to a high gloss like I normally would. The interior parts are generally easy to assemble. As with most race cars, the roll cage requires a lot of cleanups to remove mold lines. Make sure you prime it to show where that work is needed. Masking the glass is easy since the parts are all molded with nice edges to mask against.

I found it interesting which parts Platz chose to detail in this set. The largest parts wrap the fuel tank and line the inside back interior panel. Both of those are not really needed as the base kit detail is really nice as is. I thought part #18 interfered with the roll cage installation later. The real benefit of the detail set is the seat harness. This is made up fabric belts that thread through numerous PE parts and produces a fantastic harness. Retaining straps for the fire extinguisher top off the interior details. The brake rotor facings are very nice but frankly can't be seen once the wheels are on. The hood and trunk lid hold-downs are very convincing. The radiator face is not a great improvement over the kit part. The last PE detail was windshield wipers. Those parts defeated me once I completely botched folding the first one. The turned connector valve for the jacks is a really nice touch.

The decals in this kit are fantastic! Come off the backing paper easily and settle down with Solvaset. The best example of that are the decals over the rear fender flares. Rubber racing slicks are included and need a little trimming of flash before you push them over the rims. Decals are provided for the tires, and they worked well there as elsewhere. The body snapped onto the chassis, fitting just as well the rest of the kit.

This is a fantastic kit. The base kit is a pleasure to build as everything fits and the decals work perfectly. The detail set has some nice additions especially the seat harness, but you don’t need it build a nice model. However, the price point of the detail set is worth it for the seat harness alone. I would highly recommend the base kit for any modelers, but the detail set should be reserved for those who have some experience working with PE.

Thanks to Platz for providing this great kit and to IPMS for trusting me to build it for you.