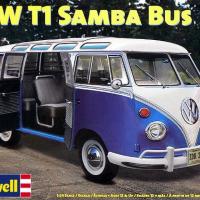 In 1950, Volkswagen brought out a vehicle that, like the Beetle before it, would become an icon of the 1960’s – what we now know as the Micro-Bus. It was available in many different versions over the years: panel vans, pop-up camper vans, and even as an open-bed pickup truck. But one of the most popular was the Samba Bus, also knows as the 23-window van due to the large number of windows. There have been a number of versions of this vehicle in kit form over the years; let’s take a look at the latest one from Revell.

The kit is molded in white, with chrome and clear trees as well. Four vinyl tires and a large decal sheet round out the list of parts. All engraving is crisp, and there is no flash to speak of. Seams are fairly light and easy to remove.

The instructions are a 12-page booklet of clearly-drawn line drawings. Parts are named and numbered, and there are numerous paint call-outs that appear to be fairly accurate.

The chassis is prototypically simple, and looks “right” when completed. The front wheels are poseable. All four wheels are designed to roll, but you will need to open up the holes in the centers of the outer wheels a bit in order to allow the wheel retainers to turn freely. I didn’t, and the retainers were an extremely tight fit.

The engine is also an extremely simple build. Since part of it is buried in the chassis, the lower portion of the engine doesn’t exist. This makes for a very interesting-looking generator/belt assembly, which includes only half of the lower drive pulley. A little detail painting here will go a long way.

The interior builds up on a separate platform that mounts to the top of the chassis. Three rows of seating make for a lot of seat supports, handles, and cushions to paint and assemble, but it all comes together well. There are decals for the speedometer and gas gauge, clock, and the grillwork pattern on the dashboard, as well as for the steering wheel hub.

The body is made up of 10 separate pieces, plus the roof. All the doors open, and the hinge mechanisms fit well even after several coats of paint; just be careful if you do any test-fitting, as the tiny pins break off easily when being snapped in and out of their openings (yes, I learned this the hard way). Alignment of all the pieces is, of course, critical to making everything look right; fortunately, the chassis attachment points for the body are well-designed and make lining things up relatively easy. Pins in the body that fit into holes in the roof also assist in getting everything properly lined up. Oh, and don’t forget those 23 windows (25 counting the split windshield), which fit well but require that their edges be painted black. Decals are provided for the piece of chrome trim that goes all the way around the vehicle. Two sets of bumpers and turn signals (US and European styles) are provided, as are decals for both European and US license plates. The taillights and turn signals are clear plastic and need to be painted for accuracy.

It took me quite a while to get this build going. The body panels are also the side panels for the interior, and working out how I was going to put 3 colors on the interior and 2 on the exterior without screwing the whole thing up turned out to be rather daunting. My final solution was this: the main interior color would be gray primer, with a lighter gray in the trim panels. The areas around the windows would remain gray instead of being painted white; I found photos of both color schemes on the web. Outside, I chose to go with a flat white basecoat followed by a flat blue on the bottom half, and then a couple layers of gloss over the whole thing. The quick drying time and relative ease of application of the flat paints compared to gloss made the whole process a lot less stressful and time-consuming than it might have been. Most of the paints were Krylon, except the light gray, which was Testors Model Master.

The instructions called for the entire chassis to be painted semi-gloss black, but my references showed this to be incorrect. I painted mine the same color as the lower body, but I also saw at least one example where it was painted white.

One major issue cropped up as I was preparing to install the body panels on the completed chassis/interior assembly. There is a body panel between the bottom of the tailgate and the top of the engine cover, and I suddenly realized that I had not painted it. In fact, there was no such piece shown anywhere in the instructions. It turned out that that panel was part of the interior pan, which by this time was already fully painted and assembled. I ended up spraying some of the blue Krylon into the cap of an old can of spray paint and brush painting the panel. It turned out fine, but it had me worried for a while.

Another issue with the body is alignment of the body panels. Both my chassis and interior pan were slightly warped: higher in the middle than at the front and back. I thought this had worked itself out when I attached the two pieces, and in fact the body does look like it mates up well with the chassis. But the fit of the passenger-side doors reveals that not everything is as well-aligned as it should be. The roof, also, does not want to stay attached to the right front quarter of the body. (The instructions say not to glue the roof to the body, but I think most builders will find gluing a necessity.)

Because this was a review build, I decided to use the chrome trim decals that came with the kit. These went on fairly well and responded nicely to Micro-Sol, but if I were to build this kit again, I would try Bare Metal foil; the decals are barely visible. There were also decals for the bumper inserts, but because the inserts were raised so high, the decals just would not lay down. They were also too large for the inserts. After trying to apply two of them (one on the front and one on the rear), I ended up pulling them off. Here again, foil might be a better choice. There were still other decals for the engine vents on the sides of the body; again, the vents stood out so far from the rest of the body that getting the decals to lay down into the grooves in between while keeping them properly aligned was a greater challenge than I was willing to accept; and since none of the references I found showed chromed vents, I left them off. Also included were silver decals for the faces of the rear view mirrors; these are pretty much useless, as they are not in the least bit mirror-like. I sprayed my mirrors with Krylon chrome paint and used a little Micro Krystal Klear to give the lenses some depth.

Decals are also provided for the whitewalls on the tires. This was my first experience with putting decals on tires, and it was not entirely successful. Two of the four went on fairly straight, but the others did not go as well.

Despite the issues mentioned above, the kit did go together fairly well. The seat supports, especially, could have been incredibly difficult to get lined up correctly, but they went together without a hitch. All the chrome trim pieces, including the big VW emblem on the front, went in place without a hitch. There are solid mounting points for just about everything, and none of the issues that I ran into are insurmountable for a builder with some experience and patience. Ultimately, the proof is in the finished product, and despite my issues, I like how the kit turned out.

This kit is definitely not for a beginner, but anyone one with at least moderate skills should be able to get good results. Many thanks to Revell and IPMS/USA for giving me the opportunity to build this kit.