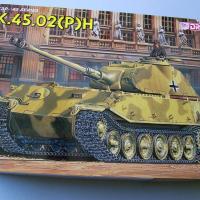 The references I used for this review include Panzer Tracts No 20-1, Paper Panzers, and Germany’s Tiger Tanks VK 45.02 to Tiger II.

The production contract to build these vehicles had been awarded in February 1942. The subject vehicle for this review never made it to full production. Several turrets and hulls were completed, but because of significant problems with the Porsche designed and built engines and suspension the contracts for the production series were terminated in November 1942. The fifty turrets manufactured for this vehicle eventually were used on the first 50 Tiger II tanks, and were known as the “Porsche“turrets...

It can only speculated on how well this tank may have fared in combat had it made it to full production. It was a complicated machine, no doubt, and if the history of the mechanical problems for the Elefant/Ferdinand and Tiger II are any clues, most of the VK 45.02 would have been disabled or lost by mechanical failures than by combat.

The kit is packaged in a typical large and sturdy cardboard box with an image of the vehicle in a city scene on the top panel. The box bottom features several details that are often helpful in the build when the instructions may be a bit unclear. The box top also includes information that the kit contains over 300 parts for skilled modelers 14 and over.

Had production proceeded on this tank the first vehicles most likely would have entered combat by as early as mid-to late 1943 (??). Colors and camouflage schemes would have been whatever the order of the day happened to be. I decided not to follow the instructions and use my own camouflage scheme just for fun...

Frompast experience the kit decals perform well and this kit was no exception. I felt the turret looked a bit bare and took the liberty of adding numbers to the sides. One the decals were in place and allowed to dry over night the weathering was applied and the model was finished.

The large rear-mounted turret gives this vehicle an interesting and unique look. The “Porsche” turret has a certain sleekness about it, while the hull and running gear shows its “Elefant/Ferdinand” heritage. It is a rather interesting combination. I did add a tail light and machine mount to the commander’s copula.

I would recommend this kit for any armor builder interested in Paper panzers or just plain armor subjects. This model will certainly be appreciated by the “what if? “crowd, and does offer an interesting addition to any collection. Aside from the minor errors in the instructions I enjoyed this project. This was not a difficult build and the average modeler should have no problems with the kit. I enjoyed this project and am happy to add this unique vehicle to my collection.

I thank Dragon USA and IPMS/USA for the opportunity to build and review this kit.