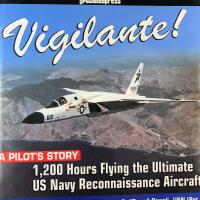 Thank you very much to Specialty Press for providing a review copy of their new release, Vigilante! A Pilot’s Story: 1,200 Hours Flying the Ultimate U. S. Navy Reconnaissance Aircraft, by CDR Robert R. “Boom” Powell. As always, I appreciate all those in the IPMS Reviewer Corps, whose work is critical to sharing new and exciting modeling publications and products with the world.

This book is not simply one pilot’s compiled experience, nor is it merely a description of operational and combat records of the Vigilante. It tells the fascinating story of the entire Vigilante’s lifespan in an extraordinary anthology of forty-plus aircrew and support staff stories in context of the aircraft’s history. An excellent balance of technical language and human perspective makes for an engaging read with a relaxed style. Both naval aviation fans and scale modelers will find a wealth of information throughout the publication. The photographs and details are excellent, wrapped within an easy-to-read narrative. The hardback format has 192 glossy pages, 142 color images, and 125 B&W images. The book dimensions are 10 x 10 inches, with a colorful dust jacket.

I highly recommend this book! It was a very enjoyable read.

I absolutely recommend this volume, from both the scale-model and historical perspectives. I will also add that the scope of book, focusing a series of experiential anecdotes, gives a more “in the plane” sense than many historical aviation books.

Thanks again to Andrea at Specialty Press, you and your company’s work helps keep history alive. CDR Powell, you clearly put heart and soul into your book; that effort is very appreciated. Thank you again to the stalwart Reviewer Corps for your hard work in making these review opportunities happen, Go Team!

Front cover, view on the bench

Back cover, view on the bench

Chapter example, view on the bench