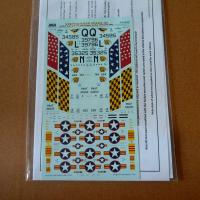 AoA (Angle of Attack) decals are in their fourth year by my records, and continue to release some of their earlier Vietnam War subjects in different scale from the earlier releases … We sincerely appreciate AoA sending IPMS/USA their latest releases for review! (…and the usual thanks also to IPMS USA Reviewer corps leadership John and Phil for sending these my way...)

This sheet provides 11 different paint schemes, and covers the range of Vietnamese A-1 schemes from the early 1960’s to the early 1970’s.

Airframe stencils in included for each model, along with national insignia. This sheet focuses on the main markings for the aircraft, particularly since several of these SPADS were repainted with camo and as such did not receive replacement stencil markings.

Notable options include several early 1960’s A-1’s with colorful tail bands; I believe these markings would sell the sheet more than anything, as they certainly have some different markings.

As a review item, I was (again) very impressed with the decal quality and performance on the model. All stencils are readable, and the accuracy and level of fidelity to color and density is excellent. The white markings did not allow background colors to show through… and the various color areas were opaque to the point they did not need any white backing (such as small lettering).

I opted for the 1962 DaNang-based A-1 with overall Light gull gray paint and white ordinance underwing pylons. The decals performed magnificently, and provided a different canvas for a new view on an old airplane. I built this kit over four days while at attending the American Society of Aviation Artists convention, and worked on it in the evenings… The Hasegawa kit was easy to assemble, required no filler, and was ready for paint and decals in little time. With a clear coat over the light gray overall paint scheme, the decal process only took two hours…

All in all a great Package from AoA decals, like their other subjects I’ve had fortune to review, I give them max scoring for subject, presentation, and performance! Keep it up AoA, and thanks John and Dave for keeping me on the team…