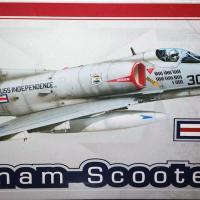 My fascination with the A-4 Skyhawk dates back to 1979 when I attended my first air show at Lemoore Naval Air Station in the California’s central valley. As a freshman at Fresno State I was enamored with the Air National Guard F-106 Delta Darts, then flying out of the Fresno Air Terminal. I wanted to get a closer peek of the aircraft at the upcoming air show. After the long drive to and onto the base we were parked on, the northwest end of the base next to ramps was full of hundreds of A-4 Skyhawks and A-7 Corsairs. It was explained to us that these aircraft, although still front-line attack aircraft were waiting disposition, as they were in line to be replaced by the soon arriving F/A-18A. Most still had their colorful markings that were applied during the Vietnam War. I sure wish I had taken more photos as we walked down the ramps parallel to these historic aircraft.

To make things better on this day, the Blue Angels flew a perfect show with their A-4F Skyhawks, and we witnessed the first ever public demonstration of the F/A-18 Hornet by VFA-125, the transitional and training squadron for Hornet pilots.

Eduard’s release of the Vietnam Scooter gives you the look back to 6 A-4E/F Skyhawk squadrons that served in the Vietnam conflict from 1965 to 1971, deploying off of a variety of US Navy Carriers. I chose to do the A-4E #150058 from 1969 of VA-92, “The Dambuster”, flying off the USS Oriskany. In 1965 my brother-in-law served in the Vietnam War as a “Red Shirt” ordinance man with VFP-63 loading RF-8 Crusaders on the Oriskany.

Having built many of the Hasegawa Skyhawks (which is what this kit is based on), I am very familiar with this kit bones, and was interested in what changes, additions, and/or modifications that Eduard would be attempting with this release. The photo-etched cockpit details and the new ejection seat looks very promising, canopy masks are always a pleasure to use, and the HUGE 8 ¼" X 12 ¼" Furball Cartograf decal sheet with markings for 6 different aircraft is again the stand out for the Eduard releases. Surprisingly the Eduard kit does not include their new releases of A-4E/F resin wheels, resin exhaust set, full photo-etch upgrade kit or new Vietnam weapons set. But those are additionally available now from Eduard.

The Eduard instruction sheet is not just an instruction sheet, but a mini-history book on the A-4E/F Skyhawk. The very first page is full of information about this little plane’s developmental history and the role it played in the Vietnam Naval Operations. Containing sixteen pages, as compared to almost 8 for the Hasegawa kit, these instructions are easy to follow with great call-outs for the version you have chosen. Other additional items of note are a parts layout and color guide on page 2 (only Mr. Hobby and Aquesiou colors - I prefer FS #s). Page 9 is the masking guide. Page 10 thru 16 is four sided Aircraft guides for painting and decaling the version you have chosen. With each airframe, at the top of the page comes a mini history on the aircraft you have picked.

Each of the six aircraft available is identified by a letter A-F. As you go from page 3 to 8, call-outs are made for the variation to the aircraft based on your lettered version. Once I picked the airframe I was going to build, I went through the instructions and highlighted the appropriate letter designation so as to not make errors in the assembly steps. Within these instructions are multiple sub-assemblies to make the building process much easier to follow.

To facilitate this build, I will be using a combination of generic superglue, Tenex glue, Tamiya Paints, Allclad II Metallic Paints, Testors Model Master Enamel Paints, and Gloss and Flat Coats. Small amounts of MIG enamels will be used in the weathering process.

The build starts as typical with the cockpit interior, engine intake, and exhaust. These are all sub-assemblies that must first be competed before closing the fuselage halves. Be particularly cautious on sub-assembly (A), when sandwiching the photo etched dashboard together. When the PE gauges are cemented to part D2, make sure they are centered well, otherwise they will prevent the fuselage halves from closing, or push the interior tub out of position. Lots of small parts are here as well, but when completed they look fantastic, and you won’t believe how easy it was with a little patience and an Optivisor.

Before the main fuselage assembly is complete, the engine exhaust nozzle sub-assembly must be carefully located to the rear of the aircraft. I painted the inside of this assembly with Testors Model Master Metalizer Exhaust, and the outside with Metalizer Non-buffing Burnt Metal.

The next page invites you to a few more sub-assemblies, and the attachment of the main wing to fuselage. At this point, decide which hard points you will need to access in the wing, and drill the holes out. Another item of note here is that I left off parts J1 and J2 - the engine intake lips - so that I could paint these red, and add them after the fuselage painting was complete. I also left off parts F13, C2 and C1, and the flap assemblies. Clear part M3 was also left off. Doing this made things a lot easier when it came to masking and painting. Once you have added the wings to the fuselage be very careful of the slat actuators for they are very easy to break off.

Coming towards the end of assembly on page 6, we finish up the aft end of the lower fuselage, and begin to install hard points. Again, to facilitate painting, I left off parts D5, F3, A9, A10 and E46 until final assembly. I also left off all hard points until the airframe is fully painted, and decaled these parts.

On page 8, the ejection seat is a small model in and of itself. Two resin pieces, 12 photos etch pieces, and 6 decals. Patience, good tweezers, and an Optivisor will facilitate a beautiful piece. The interior of the canopy with two PE mirrors, 4 PE canopy latches, and a three part instrument panel, are another test of fortitude. After this page you should be ready for airframe paint.

The Eduard canopy paint mask is a time saver. Just follow the instructions as laid out, and mask the center portion with liquid mask or Tamiya tape. Next tack your canopy to the airframe and you are ready for paint. I also softly mounted the items I had left off in the assembly process such as slats, doors, etc. to stir sticks, so that they can be painted in the same sequence as the airframe. Place a little wet tissue paper in and around the exhaust and intakes to help maintain these previously painted sub-assemblies.

Tamiya rattle can white primer was used to prepare the surface for its final coats of paint. Once the primer had dried, I airbrushed the entire bottom surface, the correct upper- and vertical-surfaces, and all the corresponding additional parts with Tamiya gloss white acrylic. I allowed the acrylic to dry overnight, and then masked the correct surfaces again with Tamiya tape and silly putty, and sprayed the upper surface color in Testors Model Master Gloss Gull Gray Acrylic. Corresponding drop tanks were painted as well. I immediately removed the tape, and again allowed the airframe to dry overnight. The next day, the black panel around the gun ports was masked and airbrushed.

With all the painting complete and dried, I gave all the part assemblies a few airbrushed coats of Pledge multi surface (Future) allowing about 30 minutes between coats. This was allowed to dry overnight so that the next day the decals could all be applied.

I am a HUGE fan of Furball decals and found this sheet of decals to be of their usual extreme high-caliber. The decals all went down on the prepared surface with ease. On the upper surfaces of the wings, and on the vertical tail, there are some vortex generators and braces which will want to give you some fits. Take your time, press the decals down as well as you can, then use a little Solvaset or Micro Set to get the decals to soften over these harsh bumps. With a little time and two or three applications of setting product, I was able to get these decals down with no bubbles or silvering. Don’t be afraid to poke a few holes in the decals, but do not touch the decals when they are wet with the solvent. They are so thin you can easily damage them or smear the colors.

Once the decals were set, I gave the whole aircraft and accessories a light coat of Testors Model Master Semi Gloss Lacquer to tone down the high gloss surface.

At this point, final assembly and light weathering began, as I started to add all the parts I had previously left off. Once the landing gear and doors were in place I gave the bays, doors and gear a light pin wash of AK Panel Wash for Interiors which drew all the parts together. The airbrakes, flaps, slats, drop tanks and hard points were all treated the same. With the accessory parts installed I did some very faint pin washes to the major panels on the airframe. Not to overdo the washes fully 95% of the wash is removed.

Now the last few steps, opening the canopy back up, removing the canopy mask, installing the HUD and cementing the canopy in the open position took care of the cockpit. The navigation lights were painted the appropriate clear colors and installed. I then removed the tissue and installed the intake lips which I had painted a matching bright red to the warning stripe decals. The exhaust cone that had been painted in Alclad Burnt Metal was rubbed out, and was also cemented in place. There are three small pitot and angle-of-attack sensors that must be added to the front of the airframe and this is a good time for that.

At this point all that was left to add was the two drop tanks and the centerline weapons pod. I went outside the box here and installed a B-61 free fall nuclear bomb just for effect on the center pylon. The A-4 Skyhawk is the smallest manned aircraft in the US arsenal to ever carry a Nuclear weapon.

A couple of my friends asked me if the $89.95 price tag wasn’t a little high for essentially a Hasegawa A-4 with some stuff thrown in. I figured that the market price for this kit is around $78, by taking a large online retailers price with shipping, and the price I saw at a retail location that would include tax averaged out. Hasegawa A-4E/F Skyhawks are around $48, a resin seat will cost you $11, small cockpit PE sets are $20, canopy mask $7, Furball decal sheets $20. That’s a total of $106 if purchased separately not including tax or shipping. Again I believe the Eduard releases to be an exceptional value truly saving you 25% over what these excellent items would cost you if purchased separately.

I spent just a little over 35.5 hours on this build, of which 20 hours was spent on the painting and decaling. By now you may have figured out that I highly recommend this model from Eduard and personally will continue to add their release to my collection.

Thanks to everyone at Eduard for the chance to review the A-4E/F Vietnam Scooter, and to Dick Montgomery, Dave Morrisette, and the support staff of the IPMS/USA reviewers corps.