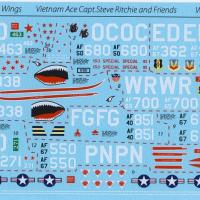 Werner’s Wings have been known for resin aftermarket and decals for helicopters. It is nice to see some fixed wing offerings coming out. The first such centers around Vietnam air ace Steve Ritchie and covers aircraft he flew during his MiG kills as well as planes flown by a few other noted pilots from this conflict. The sheet is also available in 1/48th scale and was previously reviewed and since this sheet covers the exact same aircraft with the same instructions there really isn’t anything more for me to add.

What, you want more? OK.

One of the things I enjoy is the research that Floyd Werner puts into his subjects whether he is building a model or releasing some aftermarket. In this case he lists the loadouts (where known) used by each of the planes on the missions. This is extremely helpful and a detail missed by other manufacturers.

As you can see in the photos the instructions include a port side profile of each bird with scrap pics of the marking on the nose wheel doors and intakes showing alternate versions of how the MiG kill markings were displayed. The rest of the markings are typical for F-4s in Southeast Asia.

Remember that research I told you about? Sometimes you miss something or new material comes to light. Floyd noticed two errors on his sheet so what does he do, he sends out a letter to each customer advising them of the error and includes not only corrected decals but also updated profiles. That is some excellent customer service.

According to his website these markings are applicable for Hasagawa and Monogram versions of F-4C’s, D’s and E’s.

Thanks to Werner’s Wings and IPMS/USA for the review sample.