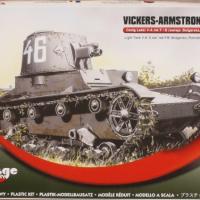 When first produced, the Vickers-Armstrong “6 ton” light tank could not find acceptance with the British Army because the 2 small turrets on the tank were fitted with machine guns only. The tank was later modified into the “B” version that had a 47mm gun and the turret was moved to the right side due to traffic in England being left-sided.

Upon opening the kit box, there are 12 sprue trees in a bag, some vinyl treads and a small decal sheet. The smaller parts trees are lettered with numbered parts. The largest tree is not lettered but the parts are numbered. There is no parts layout diagram. Marking options are for a Mk. F and B version in Bulgarian Army colors, 1938, in what looks like Panzer gray or a Mk. F version for a British Army training unit, 1939, in a dark earth color. There appears to be no decals for the British version but turret decals are provided for the Bulgarian version.

The parts count and location on this model was a little overwhelming. It appears from the amount of parts I had left over that they were intended for use on another version of the tank. If I have called out items incorrectly in reviewing this tank, please accept my apology. I usually build aircraft but accepted this tank kit to review as a change of pace. It has given me a new respect for armor builders due in no small part to the attachment of the treads. I’m sure for an experienced armor builder who has more knowledge of tanks than I do, this kit would be much easier that it was for me.

I would like to thank Mirage Hobby and IPMS/USA for providing this kit and allowing me to review it.