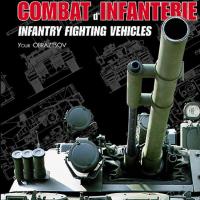 With a title like this and John writing that the text was in French, I assumed this book was going to be all about French Infantry Fighting Vehicles. Yep, I was wrong! As I started thumbing through the book and scanning over the included vehicles, I realized that this was a nice collection book about Infantry Fighting Vehicles all over the world. This is very neat “recognition handbook”. A slight word of warning….This is not a definitive collection of infantry Fighting vehicles by any means. Though a great book, it needs to be more defined by the title.

As I was thumbing through this 128 page hard covered book, some things became apparent. I, of course, sought out the Stryker. Ooops, none! Then I started to understand. There are no wheeled vehicles covered in this book. Only tracked Infantry vehicles and even some tracked non-infantry carrying vehicles are included but they are only tracked vehicles. The author has also started his collection of vehicles after the year 1961. Soooooo…The title should be Tracked Infantry Fighting Vehicles After 1961.

For such a small book, it is only 8 ¼ by 9 ¾ inches in size, it is chuck full of great photographs and invaluable information. The over 350 photographs are very detailed and useful. Each vehicle listed has at least four pictures detailing it. The break down is quite useful. The vehicles covered are given two pages each. The left side listing gives at least one large picture and the history of the vehicle. The French history comes first and the English translation next. The right side lists another great picture with the breakdown of the vehicles attributes.

The pictures are numerous and definitely not of “walk around” usefulness but some are really eye catching. Actually, it may not be so much the pictures as the camouflage schemes some were wearing. The first part of the book lists the different vehicles covered, a little history on the ICV concept, and then the starting history of each vehicle covered. The vehicle then goes into covering all the different vehicles in the book. The English translations are good enough to read but definitely could have been checked. A neat feature of the book is that at the end, there are four vehicle recognition tests. Each test has ten vehicles and you are to identify the vehicle off the one photograph provided. The last page has the answer key. As a side note, I scored a 96. I misidentified the AMX-10P. In my defense, the vehicle was completely tarped down to the road wheels.

All in all this is a great and useful book. This is a very neat and useful, small handy resource. I think the title should have been more concise I would like to thank Youri Obraztsov for researching and writing this book, Histoire & Collections for publishing it, Casemate Publishers for providing the review sample, and IPMS for posting this review for others to see and read. Have fun: Build one of over 50 tracked Infantry Combat vehicle covered in this book.