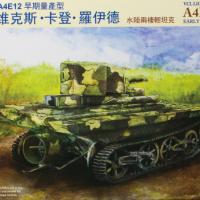 Those who know my modeling proclivities are well aware that I’m always fascinated by the small and obscure. This model, the first from this company if the kit number is to be believed, fits both of these categories nicely.

The Vickers-Carden-Lloyd amphibious tank was first developed in 1931 in England and the basic design served as the foundation for the successful Russian T-33, T-37, T-38 and T-41. The specific vehicle modeled in this kit, however, fared far less ably and was much less known. Just a few of this particular mark were built for export – about fifty overall with the lion’s share going to China. Its record of military action with the Chinese is also brief, as they were called into action only once in 1938 to attack invading Japanese forces. The armored column was attacked en route by Japanese bombers, however, leaving only a single example intact and functional. This sole survivor was brought back to base and served for training purposes for the remainder of the war. Hence none of this make ever had the opportunity to fire its guns in anger.

The model itself comes in four small sprues, plus a photoetch sheet and some simple decals. There are a few parts remaining after construction which hint at another model down the road, although I’m uncertain as to what that might turn out to be. The hull and turret are both composed of multiple pieces in the Eastern Express style. Patience is key to constructing both major assemblies, as care is needed to get the various slabs together evenly as the corners are chamfered. However, if done properly only a minimum of putty will be required.

There is also a simple interior composed of driver/gunner seats and the machine gun. Although the rest of the interior is pretty empty, for a kit of this size it’s quite adequate.

The running gear is also comparatively simple: four wheels on two bogies and a drive wheel per side. The tracks consist of link-and-length and are quite tiny, requiring some finesse in completing them. An important note here – the kit does not provide any extra links whatsoever, so be careful in removing these from their sprues. The drive gears take some patience to clean up, as there are three sprue attachments that cut right across the drive teeth. Once again, however, this is not a daunting prospect if you take a bit of time.

The photoetch sheet includes overlays around the driver’s hatch and turret base intended to provide missing rivet detail, but this detail was lost under the first coat of paint. If I had to do it all over again, I’d skip these and use the salami technique for applying my own rivets to these areas. Another point of frustration with the photoetch was the engine vent flaps, which would have looked better in plastic, I believe. There are also individual rivets included on this sheet, which seems a little preposterous. Again, salami-slicing rivets from Evergreen rod would be infinitely easier to apply and neater in appearance.

Detailing the hull, I was surprised to find that the headlights provided do not include any lenses, as they seem to have been molded to accept some. However, aftermarket items such as MV lenses can be added quite easily.

The fun part of this assembly, of course, is in painting the highly dramatic camouflage. Some people might regard this as a headache, but I enjoyed it immensely. It certainly makes for a noteworthy finish, and looks good in my collection. The final result is a tiny little military vehicle, but for the most part I found this to be far less of a challenge to assemble than models of this size often are. CAMs didn’t waste a lot of time on parts that wouldn’t be visible anyway, which certainly sped up the process. I got the model itself together in about two days and finished it in another two. Not bad!

I like the choice of subject matter quite a bit and am quite taken by the distinctive look of the camouflage. I’d be thrilled to build more of this line if and when they become available. This really is a fascinating little gem.

My heartfelt thanks to Combat Armor Models and IPMS/USA for a chance to build this tiny treasure.

Hatch open from behind, this picture also shows the engine vent hatch.

Front-right view showing the placement of the photoetch pieces.

An amphibious tank, this image shows the water drive mechanism and steering.

Photo from above front showing rivet detail and another look at the engine vent hatch.

Painted model from the rear.
Previous Next