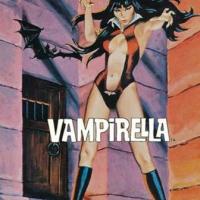 Cleanly cast in pinkish-tan styrene the kit consists of 16 pieces, including 2 sets of arms and 2 sets of legs, a base textured in wood grain and cobblestone, and an ornamental bat. The fit is fairly good, and the parts snap together firmly, leaving the arms free to move if desired. I glued everything solidly together for this review.

After everything had cured, I filed, filled and sanded to eliminate the joint gaps, also the ones that were left after joining the body halves. I felt that the smooth, sexy vamp look had been done to death, and so took a different approach to this lady. I wanted the look of a vampire in desperate need of a good meal, without re-sculpting the entire figure. I was looking for a wasted, deteriorating skin tone and texture. The first step was to paint all the skin areas with Pro-Weld liquid solvent cement. This caused a good deal of surface wrinkling and crazing. Next, I applied heavily thinned lacquer-based filler putty in selected areas and stippled it with an old, stiff brush. This caused some large, “scabby” spots to appear. Good so far. I had watched a DVD demonstrating an “undead” grayish, semi-translucent skin tone using a technique the author called “noodling”, spraying fine, faint lines of different tones onto the base color. Starting with a medium grey automotive primer base color, I put down random squiggles of Tamiya acrylic dark grey, blue-grey, a red-grey mix, and a green-grey mix, all heavily thinned (at least 90% thinner) and sprayed thru a Tamiya HG Super-Fine double action airbrush. I opted for the glowing, feral, yellow-orange bloodshot version eyes, having discarded the blank staring, blue-white eyes as not having enough contrast with the face. Some shading of the facial area was also done with the airbrush, darkening shadow areas with gradually built up coats of Tamiya smoke. Dark blue-green pastel chalk was applied to the eye sockets to deepen their appearance, then the yellow orange color, followed by the black iris. A few tiny washes of red and alizarin crimson in the corners of the eyes, followed when dry by an application of Future floor wax finished the eyes. Crimson mouth and lips, and gleaming white fangs finished the face.

The high boots and body suit were brush-painted, as was the hair. Various final coats of dead flat (no pun intended) and semi gloss sealed the work (both were Model Master Lacquers).

I really could not bring myself to clip the bat to her wrist as shown in the directions, so the alternative was to build something it could hang from. Some ½ inch basswood filled the bill, notched and glued, with a large bolted joining plate for looks. After distressing both post and beam, several heavy, dark washes were applied, followed by cobwebs, fungus scabs made from ground pastels sprinkled onto thin coats of I C Gel iso-cyanate glue, and the ever-present clanking chains finished the bat perch. The floor base received many of the same treatments, including “wet” spots of leftover epoxy glue used to attach door frame and vampire figure to the base.

This was a fun kit to build, and a good change of pace from purely military models. Plus, after having watched the Model Mania DVDs, I had wanted a chance to practice the techniques discussed, and this was a perfect opportunity to try them. My sincere thanks to Moebius for supplying the review kit, and to the IPMS/USA for allowing me to build it. Glue on!

View of completed figure base detail
Previous Next