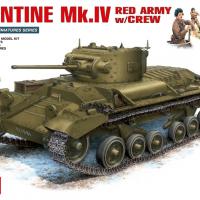 The Valentine tank was designed by Vickers-Armstrong as a private venture and was offered to the British War Department in 1938. Production for the Valentine started in 1939 with an initial order for 250 tanks. Eventually more than 8,000 Valentines in 11 different marks as well as various purpose-built types were produced, accounting for approximately 25% of British wartime tank production. Over the length of the war it was produced in several variants including the Archer ATG with a 17pdr and the Bishop SPG with the 25pdr. The Valentine saw service on several fronts including North Africa, Italy, NWE and the Far East.

The Mk. IV Valentine was equipped with the British QF 2-pounder (40 mm) gun and the engine was a GMC 6004 diesel. The Mk. IV was exported extensively to the Soviet Union where, in spite of criticism for its weak gun, it was liked due to its small size and reliability as well as the good armor protection offered the crew. This is a welcome release that drastically updates the aging Dragon/Allan kit and will be welcomed by many Allied builders.

The kit comes in a sturdy box, with nice box top art work, which is typical for Miniart kits. The model is cast in grey styrene and the quality of the molding is top notch with no major flash noted on any of the parts. Miniart has also included a five figure Red Army tank crew which will be welcomed by many. Miniart has definitely set a precedent by including crew figures with their vehicle releases. I wish other kit manufactures would take note. The instruction sheet is an eight page affair and is extremely busy. The layout of the sheet is confusing at first and I really didn’t figure out how to read it until I started writing the review. Opening both sheets fully and laying them next to each other the layout becomes clear. Trying to read the instructions like a book will lead to confusion because the steps don’t follow the logical sequence on the pages, until you lay out the open pages next to each other.

The full color 2-sided painting guide includes markings for the 6 vehicles as well as the Red Army figures with their respective part numbers and colors indicated. For both sides the numbers in the blue squares are the color numbers and the numbers in the yellow circles are the decal numbers. The paint chart has the six most popular hobby paints listed and it also includes the popular name for the paints as well.

In an unusual move, Miniart has you begin construction with the gun breach and turret. The first 14 steps in the instructions have you completely build the turret with the (exception of the barrels) for the main QF 2-pounder gun and the co-axial machine gun. These are added in the final step when the turret is placed on the hull. Like most armor modelers I chose to start construction with the suspension and lower hull. The suspension has much better detail than the old Dragon kit. The main suspension housing (Part B6) does not suffer from the massive sink marks that mar the old Dragon suspension. When building the arms of the suspension Part B10 needs to be inserted and glued to Part B11 before the suspension arms are glued together. The join between these two Parts is problematic. If done correctly the suspension arms will rotate. This is easier said than done. While building I saw a potential problem and made sure the suspension arms were horizontal, which turned out to be a good thing because when the glue dried The arms did not move. I found it easier to glue the spring (Part B46) to the rear half of the bogie arms (Parts B43, B44) then glue on the front half (Parts B41, B42).

Moving on to the Idler wheel mounts. Parts C10 and C11 are glued onto Parts C6 and C7. Parts C10 and C11 have a vertical rod that represents the track tensioning mechanism. This vertical rod is about .015” in dia. and very fragile. This piece is supposed to pass through holes on the inner sides of the front fenders. I ended up damaging these when test fitting everything together before I realized they needed to pass through the hull. In the real vehicle these are actually hex shaped rods. I ended up cutting them off and replacing them with .015” hex rod, after the upper and lower hulls were joined. Once the suspension arms were completed I added them to the lower hull, being sure all were lined up before the glue set;I then moved on to the individual track links. These went together very easy and both runs took just over an hour to complete.

The rest of the construction went well without any serious issues. The PE parts were nicely done and added nice detail to the hull. However, I chose to join the hull halves together before adding all the small detail. This is contrary to the instructions which, would have you add all the fine detail and then join the hull together. I added some detail to the jack block. The wooden jack block sits in a PE bracket. The block has the retaining strap molded on the top. I sanded this off and made a strap of lead foil and a PE buckle. This added a nice touch to the finished block. The PE bracket has two small slits in it which was perfect for the lead foil to fit in.

The turret was constructed next. Miniart included PE bolt heads to be added to the rear under the bustle and to the front under the mantlet. I didn’t use these, opting for salami slicing hex rod and adding the bolt heads under the mantlet before gluing the turret half’s together and adding the rear bolt heads after the turret half’s were joined and the seam cleaned up. I thought this gave better dimension to the bolt heads. Two issues I had with the turret PE was Part PE9 is a data plate on the top of the turret. This is actually Part PE 8. PE 7 is a vent cover which has two folds longitudinally and two end pieces that fold down. Unfortunately, there is only one longitudinal fold line etched in the piece. The end pieces indicate the first fold is curved. I tried bending around a drill bit but this was too difficult because of the etched relief of the piece. I ended up breaking off the end pieces and decided to just leave it off instead.

I painted the interior of the vehicle white then detail painted the driver’s compartment. Once all the exterior detail was completed I painted the entire tank with PollyS railroad Pullman Green, which I believe is a perfect color for Red Army tanks. Simple weathering included a dusting of Tamiya Dark Earth and a wash of Burnt Umber.

In spite of the issue with the road wheel spacing, I believe this kit is a major improvement over the ancient Dragon kit. Perhaps an aftermarket company will address the suspension issue but in spite of that, the finished model looks really good. I would like to build an earlier Mk. as used in the desert campaign. I am also waiting patiently for a new Bishop. I recommend this kit for anyone interested in Commonwealth Armor.

Thanks to MiniArt, Dragon USA and to IPMS/USA for this review opportunity.

Port side view of completed model

Starboard side view of completed model