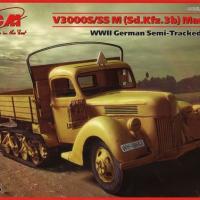 During WWII, the German Wehmacht used a varity of truck types for their supply system. The most numerous were the 3-ton trucks, and of these many were the V3000S, produced at the Ford plant in Cologne. With the invasion of Russia, it quickly became obvious that tracked vehicles were vital if supplies were to be delivered. A solution was found to develop an add-on track system that could be bolted to the frames of different types of 3-ton trucks. When added to the Ford V3000S, it became the V3000S/SSM (Sd.Kfz.3b) Maultier. The Opel truck became the Sd.Kfza, and so on; they were all called Maultiers (German for mule).

Several years ago, ICM released a kit of the Ford V3000S, 3-ton truck. This latest release has included the parts necessary to make the add-on track system to make the V3000S/SSM Maultier. What you actually get is a 2-in-1 kit that allows you build the original 3-ton truck or the Maultier 3-ton tracked truck. There are 298 parts on five sprues made with a tan plastic, plus one clear sprue. I found this plastic to be hard and somewhat brittle; one has to be very careful snipping off very small thin pieces or they will break. This is very true of the individual track links.

Steps 1-2 deal with assembling the Ford flathead V-8 engine; anyone who has built model cars of old Fords will find this very similar, only in a slightly smaller scale (1/35). You have a complete engine that only needs spark plug wires and a fan belt to be show-ready. Step 3 involves gluing the drive shaft together and adding on the drive wheels, only I would suggest that you do not glue on the drive wheels at this time – more on this later. In step 4, you place the road wheels onto their support structure, which can be tedious with removing the seams on all of the spring assemblies (eight of them). Step 5 – you glue the front tires together and then attach them to the steering tie rods. These can be snapped together, allowing one to angle the wheels in any direction you want (just make sure that both tires are turned at the same angle), then you can glue them. Step 6 is assembling the frame. The long frame pieces (A27 and A73) have several punch-out marks on the outside surfaces that need to be filled and sanded down at this point. Steps 7-8 are building the track system that was bolted to the truck frames. When you put parts E8 and E9 onto the frame, a gap results that either needs to be filled or covered with sheet plastic. One should place bolt heads on the sections that attach the track system to the frame, but that's up to you. Finally, attach the drive shaft and idler wheels to the frame. In step 9, you place the four road wheels assemblies onto the frame, making sure that they line up with the idler wheels. Now you can glue the drive wheels onto to the drive shaft, making sure these line up with the road wheels and idlers. I did not assemble the tracks at this time as the kit would have you do, since I waited until everything was painted to do that. As an aside, the tracks used were Panzer 1 tracks. Step 10 – you'll place the engine onto the frame along with the radiator. Front leaf springs are glued to the frame and then the front tires and rods are glued onto the springs. Step 11 – the front bumper is glued onto the frame, the rear tow hitch is put together and glued to the rear frame. Be careful in removing the exhaust lines, they're long and will break easily. For a better view on how the exhaust line fits, see Step 23's drawing. Finally, do not attach parts A58/A59 to the frame, they'll be in the way of the track system when you try to put it on later.

Steps 12 through19 deal with assembling the cab. There are several ejector pin marks that need to be filled on the inside of the cab roof (B21), the undersides of the front fenders (B20 &B21), and on the bottom of the cab floor (B9). It's not mentioned, but you'll need to make a few decisions – leave one or both doors open, leave the windows up or down, and so forth. This will affect how you proceed in this section This kit is not like car models where the whole body is one piece; here, you'll have to put together many pieces. So try for close fits, and any seams will need filler and sanding to smooth out the results. On my model, the outside of the doors (B22 and B23) had shallow sink marks that were removed with some sanding; check yours. In addition, I found that the steering wheel shaft (A6) needed a small spacer block (about 1/16") placed on the instrument panel to keep the steering wheel from hitting the windshield; be aware of this. I did leave off the rear view mirror, door handles, shovel, and gas can/holder till after painting to avoid breaking them off.

Steps 20-21 assemble the cargo bed. There are punch-out marks on the bottom of the cargo bed (C18), as well as on several cross members (both C12s and C15). These most likely need to be filled and sanded down. When you glue the cargo bed sides on, start with the front piece (C17) and make sure it is sitting on top of the bed (C18), as the drawing is not at all clear on this. Once the two storage lockers are put together, cut off the legs. If you don't, they most likely will be too close to the tracks. Location of the lockers vary; I've seen photos of none on the trucks, two up front, two at the rear, two at opposite corners, or four lockers. Check your photo references on the vehicle you making. Step 22 lets you assemble all your hard work onto the frame. Personally, I painted each of these (cab, cargo bed, and frame) before I put them together. Once the primer and later the paint had dried, I glued the cab on first. This has to be done to allow the cab to fit over the gear selector shaft sticking up from the engine that's on the frame. Once the cab is in place, you can proceed to glue on the cargo bed to the frame. Step 23 – you'll glue the track system to the frame. Before I did, I now attached the kit's track links. These went on well. The only problem that you need to be aware of is how easy it is to break the individual links – I did have five links left over after losing three to breakage.

Step 24 – place two plastic frames for the cargo cover into their holders. Two problems with this: first, you need four frames, not two. Secondly, ICM molded the frames wrong. The real frames were made from flat bar stock that were bent to shape, so that the flat side lies against the cargo bed side. ICM frames have the flat side 90-degrees to that and presents the thin edge to view. Since I was going to make my own cover out of tissue paper and white glue, I found some .040" x .015" brass flat stock and bent it to shape, made the holders, and glued these to the sides to hold the frames in place.

The kit has a few quirks – lots of seams to remove, lots of ejector pin marks to fill and sand flat, and a hard plastic that 's tough on thin, delicate parts. But, overall, the kit does build into a very good model and I enjoyed the process. During this build, I made extensive use of Nuts & Bolts, Volume 28, on the Maultiers. It has a lot of good photos and line drawings that will allow the modeler to make small corrections here and there on this model to add extra detail, again if one so desires.

I can highly recommend this model to anyone who wants to make a model of the Ford V3000S/SSM Maultier. I want to thank MMD/Squadron and IPMS/USA for the chance to do this review.