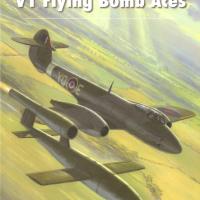 One of Osprey’s latest in the “Aircraft of the Aces” series is number 113, covering Allied pilots that shot down 5 or more V1 Flying Bombs.

This book opens with the words of the first pilot to shoot down a V1 (Flt Lt John Musgrove, in a night-fighter Mosquito) on June 16, 1944. Within minutes, 3 more V1s would be shot down that evening by other members of the same Mosquito squadron. After this exciting opening page, the reader is then guided chronologically through the story of the V1 campaign, starting with the development of the “Buzz Bomb” itself and culminating with the last V1 shot down on 28 March 1945.

Various chapters cover the ever-evolving tactics used by the RAF to counter the V1, and of course the pilots that became aces using these tactics. This was a completely different type of foe, and countering the “robot planes”, as they were initially known, required a different set of techniques. Despite the V1 being unmanned, attacking them could be quite dangerous. Over 70 pilots and navigators were killed on anti-V1 operations.

The book describes the tactics in good detail, and the is filled anecdotes describing how these were developed. For example, it was determined that the proper range to engage the V1 with guns was 200-250 yards. Further out and the attacker would only damage the control surfaces, causing the V1 to crash and possibly cause civilian casualties upon impact. Any closer and the explosion from hitting the V1’s warhead could damage or destroy the attacking aircraft. One photo shows the result of a Spitfire getting too close to an exploding V1 – the fabric on the Spitfire’s control surfaces is completely burned off. Another tactic developed successfully involved tipping the V1’s over (ideally over water) using the wingtip of the attacking fighter. In fact, the cover art of the book shows a Meteor just about to engage in such an attack. In this case, as described in detail in the pilot’s own words, the Meteor’s guns jammed forcing the pilot to resort to this method.

Most of the aircraft engaged in anti-V1 operations were by necessity the fastest in the RAF’s inventory. Mosquitos, Tempests, Spitfire XIVs and Meteors were the RAF’s primary aircraft engaged in these operations, although several pilots also became V1 aces in other aircraft. The USAAF also got into the action, and V1 aces flew P-51s, P-47s and even P-61s.

I was amazed to read about the sheer number of V1s that were launched against England. Over 10,000 missiles were launched, and almost 2,500 of those reached their targets. Pilots were needed to counter these waves of “Buzz Bombs”, and at the same time these pilots saw the opportunity to rack up (what they thought) would be quick kills. The result was an eager force of anti-V1 aircrew. By war’s end 155 pilots became V1 aces, and an additional 44 scored some V1 kills.

As with all titles in Osprey’s “Aces” series, there are numerous color plates, all presented in side-view. A total of 36 profiles are provided, spread over 9 pages. A nice variety of aircraft are represented in these profiles, and they are of the high quality seen in other Osprey volumes.

Overall, this book was what one comes to expect from the Osprey “Aces” series. There is a good overview of the anti-V1 campaign from start to finish, interspersed with many stories about individual aces (many in their own words). This is complemented by nicely-done color plates, lots of good photos, and a few useful appendices. Highly recommend to those interested in the topic.

One final note – I noticed on the publisher’s website for this book that it is available in e-formats as well, for a lower price than the print copy. As there are a great deal of books in this series, this might be a cost-effective way to add more titles to your library!

Thanks to Osprey publishing for providing the book, and to IPMS/USA for allowing me to review it!