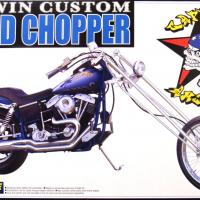 This is my second encounter with an Aoshima kit. The first was many years ago with a 1/24 Nissan Skyline. This latest offering from Aoshima is a nice change of pace, as it’s an American subject in the form of a traditional chopper motorcycle. Though MRC Academy is listed as the distributor, I was unable to find anything on their site regarding Aoshima products. I did, however, find two of the upcoming Aoshima motorcycle releases on the Dragon Models USA website, as they are listed as the US distributor on Aoshima’s site. (Review Administrator’s Note – distribution of Aoshima models changed from MRC/Academy to Dragon Models USA while Mike was building the model.)

Upon receiving the kit, the first thing I noticed was “Captain America” adorning the box art with a skull-faced, US-Flag-helmet-wearing, middle finger saluting character. Guess they’re going for a niche market or playing on the American stereotype. Opening the kit reveals much more – pun definitely intended. The first thing I saw when I opened the kit box was a cardboard picture of three scantily clad oriental women in black leathers for the “man cave.” After a good laugh, I set it aside and looked at the kit itself. The sprues are all cleanly molded with minimal mold lines and only one spot of minimal flash on one part. Lots of chrome, also cleanly molded, and what appears to be several building options for wheels, seat, and fork assembly (or a multi kit sprue used in another kit in the line). Another little detail that made me giggle was the raised-letter tire brand “Bad Year” to avoid that licensing thing. The instructions are nicely done, but the paint directions leave a bit to be desired. 6 call outs for basic colors – white, flat black, silver, blue, clear red, and clear orange; however, detail painting and color variances will really make this kit show the detail. I built mine box-stock with a change in color – red as opposed to blue for the body color.

Moving on to the actual build process, the starting point was the transmission, battery, and oil reservoir assembly. The battery is 4 pieces with a clear piece over the battery part. A simple box with a top would suffice unless you are going to build a show bike or something where you wanted that look. The oil reservoir has a chrome piece that goes between the upper and lower halves of the tank, and needs trimming to fit properly, as it’s too tall and split the halves. Assembling the frame was a bit tedious and the instructions are the equivalent to following Billy around the neighborhood in The Family Circus cartoon – lots of dashed lines with arrows directing you to connecting points. Upon completion, the frame is a good looking bit on its own. The one fit issue with the whole assembly was installing the plate which holds the transmission. The two back holes would not line up with the studs despite looking at a few things that may cause the misalignment. I eventually ended up cutting the two posts and squaring it up off of the connecting point and vertical post on the mid-section of the frame from there.

The engine assembly was smooth. The only issue was that the air intake piece didn’t line up very well between the two cylinders. Assembling the rear tire, sprockets, and chain assembly was very easy. The tire is slightly narrower than the rim so the edge does stick out, and there is not a mounting ridge for the rubber tire. The ridge would be nice to have on the rim and possibly force the outer edge of the tire to line up properly. Installing the rear wheel assembly allows the swing-arm to snap into place within the frame assembly and float freely. Two chrome pieces adorn the upper part of the frame for the upcoming rear shock installation without issue. Installing the engine into the frame was a bit tight and took some twisting & turning, but it seated nicely within the frame to two mounting points after squeezing it between the upper cross bar and lower frame. Next up was the transmission installation. Here again, the mounting studs and holes for the transmission did not match up on the plate. Attaching the clutch lever and test fitting the outer cover revealed that this will fit correctly in the next step, so again I was forced to remove the mounting points to locate the transmission in the frame.

Up next was a series of instructional issues where steps 7 and 8 should be switched around. After installing the transmission, rear fender, and belt housing, the instructions call to install the battery and oil reservoir assembly and alternator. Putting the oil reservoir assembly in is impossible with the instructions as they are. I had to remove the rear fender from the model in the previous step to get the assembly in place. The way to do this would be to install the oil reservoir assembly, and then come back and glue the alternator to the belt housing and instal it, and lastly, install the fender. Also, be sure you have a metric ruler on hand through the engine assembly, as you’ll need it to cut the various lengths of rubber tubing for the brake cable, clutch, and spark plug wires.

The front fork assembly was relatively painless to assemble, except for stripping the chrome to get a good glue point on each piece of the fork, shock, and headlight mount. The spoked wheel up front went together nicely and was held in place with a single threaded screw. No need for a brake shoe, as it’s incorporated into the fork assembly. The final touches of the bike incorporated installing the handle bars, grips, headlight, and seat. Installing the hose pieces to represent the brake and clutch lines went well. Another instructional issue says to connect the second hose from the right handle bar to the “right tank” without visual aid. The hose connects to a piece on the left side of the tank from a previous step. The gas tank is made of two separate halves which mount to either side of the frame, leaving an obvious seam, which is then conveniently covered by a gauge cluster piece. Attaching the seat to complete the top-side of the bike leaves an obvious issue – the seat back is wide open. A simple bit of styrene and putty will patch the gap but it is a significant enough issue that should be addressed within the kit pieces to include a seat back. A sissy bar adorns the back of the seat and frames it up nicely. Topping off the build is a four-piece exhaust – two header pieces and two end pieces for the tail pipe – which lines up nicely with the cylinders and the mounting points on the frame of the bike.

All in all, this is a great kit offering from Aoshima. It’s nice to see an American icon like the chopper being offered from an overseas manufacturer. The detail in the kit is very nice and the potential for a stand-out model is there. Minor fit issues with the transmission plate and air intake are easily overcome, and making sure to plan ahead and reverse steps 7 and 8 to get the oil reservoir assembly in place will help things go smoothly. The gap in the back of the seat is a bit disappointing, but again an experienced modeler with a bit of styrene and putty will cure the issue. The overall fit of the kit is great, with the above mentioned exceptions. Using good reference pictures and stepping away from the simplistic six-color call outs in the kit will really make this model come to life. I would like to thank Aoshima for this review sample and IPMS/USA for the opportunity to build it. It’s a great kit offering with nice details. I also look forward to another Aoshima motorcycle kit in the form of a US Army type which would be a great candidate for an old-school bobber motorcycle build.