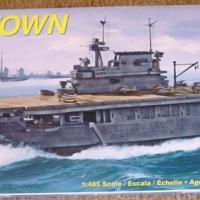 USS Yorktown, a 19,800 ton aircraft carrier built at Newport News, Virginia, was commissioned on 30 September 1937. Operating in the Atlantic and Caribbean areas until April 1939.

The U.S.S. Yorktown was among the first "true" aircraft carriers ever built. During the Battle of Midway, the Yorktown scored a decisive victory against the Japanese, with the help of the U.S.S. Enterprise and the U.S.S. Hornet. For the heroic sacrifices made by her soldiers in this battle, the Yorktown earned three battle stars. Kit features highly detailed hangar and flight decks with optional-position deck elevators and cranes, twenty Douglas SBD dive bombers, a display stand and official U.S. Navy marking decals.

The Kit - What’s in the Box

The kit measures 20.25 inches overall at 1/480 scale and has a total of 114 pieces molded in gray plastic. While the molding is generally good, some of the parts are over scale and there is some flash. The level of detail is also not bad and is also typical for a Revell kit.

The kit comes with a single Hull and Deck, a decal sheet and Signal Flag sheet.

The flight deck fore and aft elevators are molded so you can cut them out easily, then they can be set in the lowered position.

As I started this kit I couldn’t help but remember the days building kits like this as a kid.

The instructions have a simple layout and the parts are all number, this is a great kit for beginners ages 10 and up.

First was the hull, Revel has simplified the construction process by providing a single hull and deck. I had to clean a thin seam along the bottom and sand down the spur links.

Other than that she had no other defects, the Flight deck only needed a little cleaning around the edges.

Next I adding the under deck plates, this is where you need to break out the clamps and rubber bands. These parts always need a little love to get aligned correctly. You will have to trim and putty the seams, a normal process for this type of kit.

There is a not a lot of details on the lower decks so this is going very fast.

While that’s drying I started building the island for the upper deck, and added the catwalks that go around the flight deck, you will have to sand and putty some of the seams on the island to get a clean fit.

Next was the aircraft and life boats, you will need to clean them up a bit, sanding the seams. Then you can start painting and decaling.

Now we can attach the flight deck to the lower hull, and add the island and upper deck fittings. If you got the lower deck in correctly things should just fall in place.

Painting was simple and fast. I started with the base color Humbrol 128 Gray for the entire ship. Then masked off the bottom and painted it with Testers Dark Gray.

Next was the flight deck, after masking it off i used Tamiya Color XF-57 Buff for a light wood look. Then sprayed it with Model Masters Gloss Lacquer and washed it with a thin layer of Winsor Newton Oil -Raw Umber to bring out the details

The Base coat for the aircraft was painted with Humbrol metal cote 27001 along with Testers enamel paints, yellow and red.

The decal sheet provided in the kit is of good quality. Flight deck identification markings are provided but these were used in her pre-war fit. The name for the stern, draft marking for the bow and stern and 40 roundels for the aircraft are also on the sheet.

Overall a nice kit for beginners, with a little love you can turn this kit into a nice looking model. If you choose to go all in, there are aftermarket upgrades available. Gold Medal Models has a photoetch detail set. Nautilus Models has a resin upgrade, which includes a correct island and armament for her Coral Sea fit. White Ensign Models has a line of 1/500 scale resin aircraft that include accurate Dauntless, Avengers, Wildcats, Devastators and Wildcats.

I would like to thank Revell and IPMS/USA for the opportunity to conduct this review.