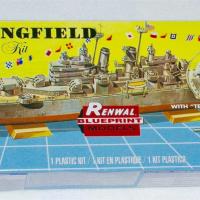 The kit is of the U.S.S. Springfield, one of 27 Cleveland Class light cruisers built by the United States during the Second World War. Her primary role was to provide anti-aircraft protection, but she also served in a shore bombardment capacity. After the war she was laid up but in the late 50’s she was one of three Clevelands to be converted to a guided missile cruiser of the Providence class. Her rear six inch turrets were removed and two twin Terrier SAM missile launchers were installed. She served in this capacity until being decommissioned for the last time in 1974.

This is model is one of the Revell Select Subject re-releases from long ago. Originally issued by Renwal, Revell acquired this companies molds and over the years has re-released these kits from time to time. Accordingly, it is not a ‘state of the art’ ship kit. However, Renwal kits were some of the best of their era and they made kits of subjects others did not. It does suffer from some of the typical features of ship kits of that time, such as molded on railings and thick bulkheads and simplified detail but has a one-piece hull, which makes assembly a bit easier. Well, not really one piece. There is an insert piece for the bottom that accommodates the stands.

I initially started this kit as I do all these “moldy oldies”, intending to make the very best of it I could, which in this case would mean cutting off molded on railings, thinning gun tub wall, removing molded on deck detail and adding PE radars and then some basic rigging. However, a time press changed all that after I had started, so only the molded in anchor chains and tracks for the aft helo-hangar door and the railings on the main deck were removed. The former two items could be used as is, but those main deck “railings” must go. You can see how thick they were from the photos. The good news is the deck sits on top of the hull, not inside it, so they are easily removed without any gaps. The instructions are clear and the assembly order makes sense. There are a few problems. The instructions show the Terrier SAM launcher arms going in upside down and the missiles mounted on top of these arms. This is wrong. The box art shows the correct configuration. In addition, the two smoke stack halves numbered 38 and 39 are actually kit parts 17 and 18 and the parts labeled 17 and 18 are 38 and 39. Finally, the 6 inch turrets have holes in the middle of the roof, but no part goes there. Me thinks they are a generic part used from another kit that did have something there. Fill the hole. An omission is there is no tail rotor for the helicopter. Easily remedied, but it’s molded in on many other kits, I wonder why not here. One final thing to note is that the masts are raked, so the top parts look like they area out of alignment when the part is not on the ship. Leave them alone as it will right itself when the masts are in place. One final thing I did was to thin down the crane on the fantail. It’s way too thick.

Painting is a bit labor intensive. A red hull bottom, black anti-fouling boot, then light grey uppers with parts of the main deck wood and parts dark grey. The masking involved can be quite tedious.

The rigging diagram is very basic and has a line running from the aft mast top to the top of the crane. This would be awkward if anyone moved the crane.

Decals were basic with the ships number and name and some depth gauges. They went on fine. A sheet of flags is provided, but I think they may be a bit oversized.

The kit is very old and almost every part has a mold seam, ejector pin mark or flash on it, all of which much be cleaned up so it makes for a messy build with much sanding dust flying around. The 40mm guns and 5 inch turrets just don’t look right. The 40’s look too big and the 5 inch turrets are the wrong shape and also look large, especially next to the triple 6” turrets.

When completed it does resemble a Providence class cruiser, but to make a contest worthy model would require a massive amount of effort. However, to use as a teaching aid for a younger modeler, it would fit the bill being that it’s just detailed enough, has a simple assembly and is reasonably priced.

Finished Ship, Port Side
Previous Next