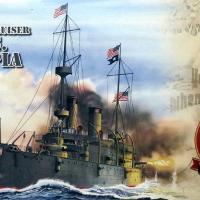 Well, lads and lasses, time to quit playing and report out. This was, I think, the most fun I’ve had since I began reviewing kits, and I am known around club meetings as a guy who enjoys building anything. I am at 90%+ completion, with only the starboard side photo-etched parts and the rigging to do.

My part 1 review ended with the hull complete, brass barrels for guns installed, and the plastic deck work started. Sanding preparation for the decks went well, and then installation of the decks commenced. The kit shows its age here, as there is no way to get the 3 decks installed without a gap somewhere. I played with several options, and all will cause extra work later. The good news is that the laser-cut wooden decks will cover the gaps no matter where you leave them. The bad news is, the holes in the wooden decks for installation of the capstans, peloruses (pelorusi?), and such will pretty much not line up no matter how you install the plastic decks and the laser-cut pieces. This causes extra work later on, but is not beyond even my limited skills. I used a combination of drill work and cyanoacrylate to get the vents & skylights & such installed.

The laser-cut decks, in my opinion, make the model. Once the decks were on, construction accelerated until it was time for the photo etched parts. One word of caution, though: the instructions are pretty general, particularly where the photo-etched parts are concerned. You will need to go to the photos in the rear for each step to make sure you have the right photo-etched parts. The order of assembly is key, as well. Lots of dry-fitting is needed.

The boats assembled easily; they fit on the boat deck as indicated. I chose not to pose a boat on the major davits. The stacks went on without a hitch, as did the rest of the plastic bits. With most of the plastic installed, I began the photo etched portion. This was a bit confusing to me, matching up the correct railings with the decks upon which they sit, but the etch itself is a dream to work. For several of the longer pieces with a number of complicated bends, I chose to cut the etched piece to get the angles done better. I understand from a couple of my ship-building buddies that is a standard technique. The photo-etched parts all fit wonderfully once you have the right one identified. I find working with etch in this scale is easier than the 1/700th scale SMS Emden I have on my table, but not as easy as most 1/35th scale armor kits I have done. The only disappointment was the little PE platform which mounts above the conning tower in front of the pilot house. It is omitted in the instructions and not identified in the photos, though clearly shown. It worked up nicely into the indicated shape, but it would not fit very well when installed. I trimmed it several times, and only then realized that the instructions show a much more robust plastic conning tower below it than actually comes in the kit and the instructions show the conning tower installed quite a bit more forward than the hole in the deck into which it fits. Be warned; you’ll have to reposition the conning tower if you want the PE platform above it to fit well.

I have assembled several blocks for the rigging as per the instructions. The rigging looks to be easily done, and the paper flags provide for a variety of paint jobs (and changes in Admiral Dewey’s rank).

You can note that even in the views of the finished port side, there is a lot of touch-up painting to do before the final dullcoat. More experienced modelers (with PE) will have less touch-up to do.

The accommodation ladders can be rigged down in the moored position, or stowed as for when the ship is underway, and they are comprised of PE and plastic parts. I show the one lifeboat glued to the lifeboat davit to show what one looks like if glued to the original kit’s plastic blocks. The instructions show how to hang it with manufactured blocks and rigging, which will be more realistic.

Many, many thanks to Squadron for providing this kit; experienced modelers will no doubt do well at contests with the upgrades provided. Thanks also to IPMS for allowing me the opportunity to build and review it.