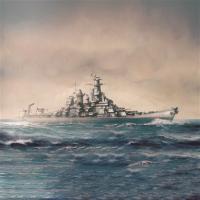 When is the last time that you really had fun building a model? Taking a cue from kits like the Bandai Gundam series that my son built several years ago, Academy, and some others manufacturers, are beginning to release kits that are molded in multi-color plastics. The benefit is that without the use of paint, and only a minimal amount of glue, a modeler can realistically create a kit beyond a simple monochromatic representation of their subject. In addition, the fit and finish of kits like this are also beyond what is found in a typical snap-tight kit. In their latest release, Academy has produced a WWII era USS Missouri that really is fun to build, and will bring the joy of modeling to anyone that is able to work with small parts.

The USS Missouri (BB-63) was the third of the four Iowa-class battleships to be constructed, but actually finishing after the USS Wisconsin (BB-64), she was technically the last battleship built for the US Navy. Ordered on 12 June 1940, the keel was laid on 5 January 1941, and she launched on 29 January 1944 at the Brooklyn Naval Shipyard. The ship would take part in WWII, Korea, and Operation Desert Storm before her final retirement on 31 March 1992. The ship is now moored as a museum near the USS Arizona Memorial on Oahu as the two ships represent the beginning and ending of the Second World War.

Upon opening the box for this kit, the builder will find upper and lower hull assemblies, as well as the two bridge parts and smoke stack covers separate from the sprues holding the majority of the parts. The parts for the base are on a single black sprue while the 20mm and 40mm guns, searchlights, and life rafts are on two identical black sprues (just for your information, there are a few extras of each of these parts). The rudders and propeller shafts for the outboard propellers are on a red sprue while the three deck pieces and 16-inch gun turret tops are on the blue sprue. The five-inch guns fill one gray sprue, while a smokestack and mast assembly fills another, while the majority of the individual parts are on one large gray sprue. Instructions are printed in color on two glossy, folded sheets covering the 22 assembly steps and marking options for an unpainted ship using stickers, and a painted version using decals.

Not being one to leave well enough alone, I did opt to paint the blast bags on the 16-inch guns (Model Master Acryl Aircraft Interior Black), the propellers (Humbrol Brass), and the two SC-1 aircraft (MM Acryl Flat White, Intermediate Blue, Dark Sea Blue, and Gloss Black). I used the decals for the “stars and bars” on the aircraft, but otherwise used the stickers. Most of the parts will fit and hold in place without the use of cement, but I did glue the two pieces for the lower hull together, and also joined the lower and upper hull as well as the deck with Tenax. The life rafts, searchlights, planes, and 20mm guns were all glued into position per the instructions.

My greatest hit for this kit was the ease of the assembly. Without the painting, masking, and touch-up painting process slowing me down, this was one of the fastest ship builds that I have experienced for the number of parts involved. The finished kit looks good, and may be a good choice for modelers with improved skills that are not yet ready for the complexity of masking and painting a ship.

I had no significant misses for this kit. I have found that in the few days since finishing the construction that two of the flags want to unfold though. I also noticed that the aircraft markings on my sample had the blue slightly offset, which results in a white area where there should be none. My side markings for the planes also required the use of Solvaset, where the wing marking settled without issue using Micro Set and Micro Sol.

In conclusion, I would highly recommend this kit to anyone that just wants to have some fun building a model. With the exception of some small parts, the kit should not present too much of a challenge to builders, and if you build the kit as I did, it can likely be completed in a weekend, well maybe a holiday weekend.

I would like to thank the folks at Model Rectifier Corporation for being gracious enough to provide this fine Academy kit to the IPMS-USA for review! I also like to thank Dave Morrissette for his time and efforts in running the Review Corps as well as allowing me to perform this assessment. I also appreciate the folks behind the scenes in the Review Corps who keep the review machine running so well, and finally my most sincere appreciation to all who take the time to read this.​

Port side view of Missouri

Starboard side view of Missouri

Top side view of Missouri

Top view of amidship
Previous Next