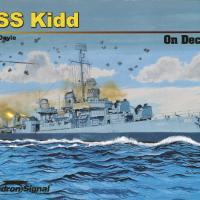 Squadron has done it again.  Here is another outstanding pictorial and brief narrative of one of our historical WWII ships.  The USS Kidd, named after Rear Admiral Isaac Kidd, CO of the USS Arizona, is a Fletcher Class destroyer.  Launched 28 February 1943 at the Federal Shipbuilding and Drydock Co., Kearny, New Jersey, she was commissioned just short of two months later, on 23 April, 1943.  There were 175 Fletcher Class Destroyers produced, therefore making it the largest class of destroyers built.  She first served in the Atlantic and then the Pacific.  On 11 April 1945, she was stuck by a Kamikaze that killed 38 and wounded 55 of her crew.  She returned to the fleet on 1 August 1945 to finish the war.  USS Kidd was decommissioned and placed in the inactive reserve fleet on 10 December 1946.

She returned to active duty with the outbreak of the Korean Conflict on 28 March 1951.  She remained in the active fleet till 19 June 1964 and was again placed in the Naval Reserve Fleet.  She remained until 23 May 1982, when she became a permanent display at the Louisiana Naval Memorial Commission, Baton Rouge, LA.  There are 4 Fletchers in existence today and the "Kidd" has been painstakingly preserved as she looked during WWII.

There are an amazing number of very detailed and clear color photos that start at the pointy end and cover everything all the way to the back end (stem to stern for you land lubbers).  All the photos have a caption that explains in detail what you are looking at. Most of the photos are exterior shots, with a few interior ones thrown in.  It seems that all but three of these photos were taken as she sits as a museum. There is nothing wrong with this, especially for the modeler who wants to superdetail his ship or the naval historian interested in the design and machinery of the Kidd.

The very last photo to me is worth the price of the book.  It shows the Kidd sitting high and dry on the banks of the Mississippi.  When the river is low during the winter months, it sits in a specially built cradle which in effect is a Drydock.  This gives the visitor an opportunity to view the entire ship.

Thank you to Squadron Products for the review book and thanks to IPMS/USA for giving me the chance to review it.  I would highly recommend it to all naval enthusiasts.