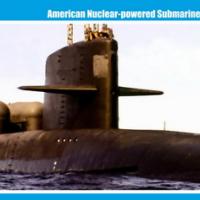 The Ben Franklin class was composed of twelve submarines, SSBN-640 to SSBN-645 and SSBN-654-659. The class was an evolutionary development from the earlier Lafayette-class of fleet ballistic missile submarines. This class can easily be identified by the fairwater planes' location halfway up the sail; the Lafayettes and James Madisons had the fairwater planes in the upper front portion of the sail. In 1993, Kamehameha was converted to a Dry Deck Shelter/swimmer delivery platform, reclassified as an attack submarine, and given hull number SSN-642; her ballistic missile capability was removed and thereafter she carried only torpedoes as armament. Following conversion, she was transferred to Pearl Harbor, Hawaii, for the remainder of her operational career. She holds the record for the longest service life of any nuclear submarine—nearly 37 years. Kamehameha's sail with fairwater planes, the upper half of her rudder, her bust of King Kamehameha I, a koa plate, bow and spear, and the wardroom monkeypod wood table are stored at Pearl Harbor, Hawaii. The USS Kamehameha was the last to be de-commissioned (04/02/02) and recycled (2003). Check out her web page at USS Kamehameha

Mikro-Mir has added a new sprue to their previously released USS Franklin (SSBN-640) kit (350-028) to produce this new kit. The outer packaging is your typical upper and lower tray type boxing. The parts and instructions are all loose in a re-sealable plastic bag. A nice touch is that the photoetch fret, clear sprue, and the decal sheet are carefully protected in a separate re-sealable enclosure. I would recommend that you wash all the parts to remove any remaining mold release. There are mold lines present on the parts, but they are easily cleaned up with sandpaper or a scalpel blade. There are a few sink marks that will require filling, notably on the upper deck (Part 18) on both sides.

The new sprue contains the two Dry Deck Shelters. That totals up to five injected plastic sprues, one photoetch fret, and a decal sheet. The instructions include a short history in Russian and English. The second page provides a parts diagram with part number call-outs. This is rather essential as the plastic parts are not numbered on the sprue. The instructions are in picture format with brass photo-etch parts indicated in red. The last page provides color call call-outs, again in Russian and English. You can find a color .pdf file of the instructions at here: 1007867-58-instructions.pdf

I started off with the hull, using Tamiya Thin Set at the bow, then moved on to the tail. Test fitting is critical as there are no pins or guides although I had no issues. Once I had both ends straight, I ran Tamiya Thin Set down one side, clamped and let dry, then worked the opposite side. I ended up using a bit of filler on the horizontal seam, stuffing Milliput SuperFine into the seam, then working it down with water prior to setting aside to dry. The upper deck was next, requiring a bit of sanding and again, Miliput SuperFine, for a variety of sinkholes on both sides. Up next was attaching the upper deck, again using side clamps and Tamiya Thin cement. Miliput SuperFine was again used to smooth the front and rear transition to the main hull and finally to fill in a sink mark on the propeller tail cone.

The base was sanded to remove some odd bumps with the vertical supports puttied to fill in some gaps. I tested the assembled base against the model to make sure I had the submarine’s center of gravity properly located and then drilled in a first mounting hole. I carefully marked the second hole using the base vertical supports as a guide and drilled the second mounting hole. I have not yet glued the base to the hull, but so far it seems to be a fairly tight fit and I may not need to do so.

Up next was the sail. The inside of the sail is marked with two indents for attaching the fairwater planes. I used a carbide drill bit (~ #70) to drill out the lower indents. I then assembled the sail halves, the inside deck (Part 8), and the sail top. The Dry Deck Shelters were assembled next. Make sure you pay attention to the orientation of the doors as the hinges are on the outside of each shelter. After clean up, the sail and the shelters were attached to the upper deck. Make sure you pay attention to the diagram in the lower right corner that gives you the correct distance from the rear of the sail to the shelters. Once everything was set, I added the horizontal and vertical tail parts, the fairwater planes, along with two smaller parts, 12 and 20. I left the clear sail windows from the front of the sail until after painting (This is a mistake – Make sure you fit the clear part before you mount the sail to the upper deck). I left the photoetch propeller off till after all painting was completed.

I sprayed the entire submarine with a Tamiya Black rattle can. I decided not to follow the color guide depicting red on the lower hull as I read in my research that operationally the lower hull was painted black. I primed and tcthen painted the photo-ehed brass propeller at this point using Vallejo Bronze (metallic). Once dry, I secured it with super glue. You will want to make sure it stays aligned in all three dimensions but I had no major issues. I then added the clear sail windows or at least attempted to. I inserted the small clear plastic into the front of the sail and the part quickly disappeared inside to the sail. My choice was to tear off the sail, or try to find another fix. I will be opting to fix this issue with Micro Krystal Klear.

I sprayed with Future and let dry, then added the decals next. Once dry, I sealed with Future again and sprayed Vallejo Clear Flat to tone the shine down. I used various Vallejo transparent colors (Black, Grey, Blue, Red, Green) to wash the various parts of the model to provide some wear and tonal variation. I followed up using Tamiya’s Panel Line Accents in Black, Brown, and Grey to give some additional highlighting.

My suggestion for improvements for future kits would be the inclusion of a jig to get the correct angles for the photoetched propeller blades. While this is not a ‘shake and bake’ kit, the average modeler can easily produce a nice model out of this kit.

My thanks to Mikro-Mir and IPMS/USA for the chance to review this great kit.