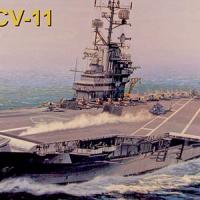 Once the hanger deck is in place, completion of the hull up to the flight deck level mostly involves adding all the catwalks, platforms and supporting structure underneath them. Here are a bunch of supports – a mix of plastic and PE. Considering the difficulty in reaching some of the catwalks and deck spaces after they are in place, I decided to paint the hull, then add the painted catwalks, going back and touching up paint where necessary. I also deviated from the construction sequence by attaching the flight deck after most of the hull construction was completed. I figured the need to fill and paint after the flight deck was put in place outweighed the risk of over-handling while attaching the flight deck.

All three elevators can be positioned either up or down. There are provisions in the kit to show some interior hanger deck/gallery deck structure if you choose to have the forward elevator lowered. The side elevators must be placed prior to attaching the flight deck. In retrospect, I should have left the safety nets off until last, as I had done with the majority of the deck-edge nets, as they were all too easy to break off with as much handling as the hull received before I was done with it.

There are several areas that needed some filling and extra sanding, both where the flight deck and where the hanger deck bulkheads attach. With that all done, it was on to the island.

The island presented some of the same challenges as the hull, with a number of attached galleries and catwalks. These were handled the same way, assembling the major portion of the structure, painting, then adding the painted decks and platforms. The aft portion was modified, eliminating the aft dome housing, modifying the platform and adjacent gallery, and scratch building a new radar antenna. The large SPS-49 radar array was replaced with an even larger SPS-43A array from GMM, and the support was modified to match the Hancock’s. Intrepid’s antenna suite included a few of the cone-shaped devices around the island, where Hancock at this time had a dozen or so, but being short of time at this point, I decided to do without and just use what was provided.

I thought I was nearly finished by the time I got to the PE railings and safety netting. Wrong again! There are a LOT of spaces for railings, and for all the railings that are included in the kit, I still needed to supplement the supply. The kit supplies two full frets of two- and three-bar rails. The majority of the kit’s supply was used on the island and upper decks. Reference photos indicated that the rails at the hanger deck level were the chain or wire type, so I used a set of Eduard three-row “drooping” rails on the lower levels. Oddly enough, most of the kit PE was very easy to work with – thin but sturdy, but the railings presented some definite challenges, as every row cut from the fret had a marked tendency to curl and bow. The railings are paper thin, and each had to be carefully straightened. Not too difficult, but time consuming at a point where you thing you’re almost done. Safety nets are provided for the flight deck bow and stern, as well as the side elevators. I robbed some elevator safety rails from a Gold Medal Nimitz set to finish off the PE application.

The final pieces and assemblies – island radar arrays, side sponson mounted antennas, whip antennas (made from stretched sprue, replacing the kit-provided PE antennas), anchors, etc. – were attached, and the model was weathered with pastel powder of various shades of grey and brown. In particular, the flight deck was heavily weathered, as photos indicated that Hancock was well worn at this point in her deployment. The aircraft and yellow gear were placed and surrounded by approximately 75 painted North Star figures. Again, reference photos indicated that a considerable number and variety of equipment, stores and containers were scattered about any available exterior deck space, so a collection of odds and ends was dredged from the spares box (including more carved-from-sprue drop tanks) and liberally scattered about to provide appropriate looking deck clutter. As for Tilley, all my scrounging of leftover parts and photo etch didn’t turn up a representation of the crane truss that I felt was close enough in appearance to the real vehicle of the era. GMM includes a proper Tilley crane truss on its CVN Extra Details set, but I’d already sprung for an extra radar array, and wasn’t inclined to purchase another full PE set just for one small bit. So, Tilley will just have to wait until Gallery or someone else releases a Vietnam era specific set of CV deck gear.

This base for Hancock represents another experiment. In order to give the surface more variation in wave height and depth along the ship’s hull, I used a 3/8” thick piece of foam core board and stripped off one paper side. The water line hull shape was cut out, and the remaining rectangle of foam was glued to the baseboard, paper side down. Waves and troughs were sculpted into the foam with a heavy brush Dremel attachment. As expected, this created a lot of styrofoam dust, so the exhaust fan and vacuum cleaner were on throughout the process, and glasses or goggles, and a breathing mask are highly recommended. The sculpted styrofoam was primed with artist gesso, then painted with a custom mixed artist acrylic color in the same way as past waterline builds. The hull was then screwed on to the base through anchoring strips build into the hull when the bottom was cut. The bow wave was made from three pieces of thin mylar, cut to shape and painted with acrylic white paint and clear gel.

This is a terrific kit, highly detailed and well engineered. With very few exceptions, the parts fit is excellent. Although complex and involved, the kit has been designed to make assembly as easy as possible. My only nit to pic would be in the fiddliness or frailty of some of the photo etch parts, plus the obvious lack of floater net baskets and fuel hoses (I may yet go back and scratch build those). But, that is more than compensated by the quality and detail of what the kit does include (the aircraft alone are simply awesome. I just hope that separate sets will soon be available). This kit makes a fine representation of the Intrepid in her final form, and with a few modifications, can also be built to represent Hancock or Ticonderoga. Gallery may be planning their own versions of other upgraded Essex class carriers, but for now we finally have a Vietnam era Intrepid in 1/350, and it’s a very good one, indeed.

Thanks to fine folks at MRC and IPMS for the opportunity to build and review this kit.

Starboard side view
Previous Next

hello, thank you for reviewing this kit and show us your exellent pictures. maybe you can tell me what deck tractors you used for this model and where i can buy it?