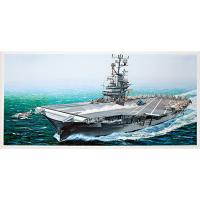 On full hull ship models, for me the build begins by cutting the hull for a waterline display. With this kit, I would use a different technique to model water. I stripped one side of the paper off of a piece of 3/16-inch foam core board, exposing the Styrofoam middle. The remaining paper side was glued to a thin plywood board to form the base. I would use the thickness of the foam, carved and sanded to shape, to replicate waves and troughs. This meant that I needed to measure down from the top of waterline to accommodate the thickness of the foam.

As mentioned earlier, the waterline is nowhere indicated on the hull. Studying photos of the real hull and comparing to the kit, I determined the point of the top edge of the boot top. Using Chartpak tape to approximate the foam thickness, I made the cut using a Dremel cutting wheel. The plastic of the hull is very thick, nearly twice as thick as what I’m used to, so it was a slow, messy process. On the other hand, the thickness adds rigidity. I glued in a couple of pieces of scrap plastic to act as anchoring strips, and with the hanger deck in place, no additional hull bracing was needed. The hull was test fitted to the base board, the foam was cut out to fit the hull, and the board and anchoring strips were drilled to accommodate holding screws. I’ll work on the water later on.

Early on, I had decided to build this kit as USS Hancock. Only a few alterations are required to modify the kit, and the first change to make is altering the bow anchor hawses. I chose to remove Intrepid’s stem hawsehole by sanding off the protruding lip and filling the indent in the bow with Magic Sculp. The bow is molded with additional hawseholes on both sides, so once the “unused” side is drilled out, anchors can be placed on both sides of the bow.

The two-piece hanger deck fits easily into place. Twelve bulkhead pieces build the sides up to the flight deck level. Sponsons are then added to support the flight deck. The way these bulkheads are designed would seem to allow relatively easy parts changes to reconfigure as other ships of the class. At this point, knowing that some aircraft would be placed on the hanger deck, ship construction was suspended in favor of the aircraft.

Eighteen aircraft come with the kit. I’ll use all but two of the helicopters, and I added three Trumpeter A3 Skywarriors. Each of these aircraft is a small kit by themselves, with anywhere from a dozen to twenty parts. Many of the parts are quite small or very thin and delicate, so extreme care is needed when handling them. I had crushed a Skyhawk’s tail, and launched a Crusader main gear into the unknown before I knew it.

All the kit’s aircraft come with wings unfolded, but in reality unless they’re about to launch, aircraft are almost always seen on board with their wings folded. I planned on having one E-1 Tracer on the cat about to launch, so all the other aircraft (except the A4s) would have their wings cut and folded. That will make the deck look more empty, but I’m counting on Gallery releasing more aircraft in the future, and I plan on bringing the squadrons up to full strength eventually. Also, Skyhawks were almost always seen with their drop tanks attached, so I set about replicating drop tanks from cut pieces of sprue trees, carved and sanded to shape. Pylons were made from small Evergreen strips. A couple of completed aircraft will be glued to the hanger deck where they can be seen, and construction on the ship will recommence.

Thanks to MRC and IPMS/USA for the opportunity to build and review this kit.