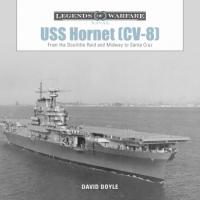 David Doyle’s earliest published works appeared in periodicals aimed at the hobby of historic military vehicle restoration. By 1999 this included regular features in leading hobby publications, appearing regularly in US, English and Polish magazines. Since 2003, over 100 of his books have been published. Broadening his horizons from his initial efforts concerning vehicles, he soon added aircraft and warships to his research objectives.

The book is divided into four chapters all covering the beginning construction to the final day of the Hornet. I’ve included a brief description of what is contained in each chapter.

The book is hardbound with 4 chapters and 112 pages. It didn’t take long for me to read all the book in one night. All the information on the ship and the photographs that the book contained were a joy to look at and read. All the photos were black and white and had a lot of clarity.

Some of the items described in the book were the ship’s initial World War tour assignments, and a description of preparation to bomb Japan and executing the mission. One of many incidents described in the book was the emergency landing of a F4F wildcat from the Yorktown on the Hornet. When the Wildcat landed the machine gun safety system had been damaged, so when the Wildcat landed the guns started firing killing five crew members and wounding twenty.

The book is full of great photographs and descriptions of activities during the life of the ship, ending with a detailed explanation of the ship’s final days at the Battle of Santa Cruz.

I had a limited knowledge of the USS Hornet previously and thus the reason to request a review of this book. The subject was very well covered with history of the ship construction, missions, and of the different upgrades throughout its service.

If you are preparing to build a model of the USS Hornet, or if you just have an interest in the Hornet, I recommend this book as a reference.

I want to thank David Doyle and IPMS/USA for the opportunity to read and review the book.