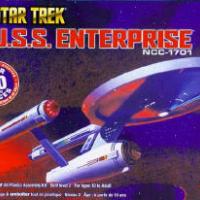 Space, the final frontier…..these are the voyages… Whoops, digressing already. To most people, these words are very familiar as they are the opening of the original Star Trek TV show. Polar Lights has come out with a nice snap together kit of the original USS Enterprise. The kit is loaded with options and is targeted for both kids and the causal builder. There are over 50 pieces made from clear and white styrene along with a very comprehensive decals sheet and stickers. You can make four versions of the Enterprise from the kit. First, the ship as was seen in most 78 episodes of the series. Second, the first pilot version, third, the second pilot version and lastly Mirror Universe show. The main differences are the nacelles and the decals. There are three separate sets of warp nacelles to get this done and the instructions are very clear on what goes where for each version. The difference between the second pilot version and the Mirror Universe is decals. (You remember the Mirror Universe show? Spock had a beard and the Federation wasn’t the nicest bunch of people). Also included on the decal sheet are names for other starships so if the Enterprise isn’t your favorite, maybe the Exeter is and the decals and instructions are there to make that also.

It was a very nice effort on Polar Lights part to include all these variations and I chose to go with the ship configured as it was for most of the shows. The kit is designed to be snapped together and all the parts clip into place nicely. I still used Tamiya thin glue to make sure – old habits are hard to break. The only thing that didn’t snap well was the warp nacelles. I ended up gluing them in place with. I wanted a little extra so I did some filling and sanding around the seams on the saucer section and main fuselage. Not really a bad fit. I also painted the model as Polar Lights give a nice color reference. At this point, I was going to get into decaling (I included a shot of the beautiful decal sheet with this article) when I thought I would try something different. I sued the stickers. This model was not meant for competition, just fun so I stuck all the stickers on and put the finished kit on it’s stand.

This kit was great fun and I am passing it along to the Junior Activities Coordinator, as it would be great for Make and Takes. At a mere $12, you can slam it together for fun or take your time and build a nice kit. I also hear that some of the Sci-Fi kit companies are doing conversions for it so there’s another option. Outside of the nacelle issue, this was a blast and I finally have Jim Kirks ship on my shelf. My thanks to Polar Lights and John Noack for the review kit.