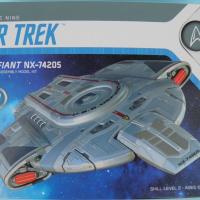 If you are reading this review I am guessing you know what Deep Space Nine was and the Defiant but just in case, the Defiant was a prototype vessel designed for Star Fleet to battle the Borg. If you need more detail there is plenty on the web. The Polar Lights kit continues their series of 1/1000th scale snap-together Star Trek universe ships. The kit has 27 parts including 13 in clear plastic and their normal 3 part stand. It also includes a plethora of decals to cover the panel colors so you don’t have to paint much other than the base color.

Construction is quick with little to hinder smaller hands from getting the ship ready for combat faster than you can say “Today is a good day to die”. There are a couple of smaller clear pieces representing the Phasors (I think) which you have to pinch between other parts and these could be a little issue requiring adult help. I did try snapping some of the parts together and the fit is pretty tight. Of course, I decided to glue mine and didn’t use any filler on the final build though it would have been better hide some of the seams. I used clear blue and clear red for the engine parts and nose piece backing them with white to try and simulate a glow. I don’t think I was that successful but since I wasn’t going to light it I made the attempt. For those who do want to light it there is ample room inside to contain what you would need. Once it was together I used a generic rattle can grey for the body color as the color call outs are Light Grey, Medium Grey and Dark Grey. I hand painted the few panels in the darker colors and then it was on to the decals.

As I mentioned before there are a lot of decals and they really were the only issue I had with the kit. Several of them fold over the sides which helps hide the seams, but they seemed a bit brittle to me and I had several crack even though I used the MicroScale System. I was able to get them basically back together but I do know there are a couple of paint masks that have been developed for this kit and would recommend one of them if you are going for a contest build.

That said when I got it done it really captures the look of this tough little ship and I recommend it to anyone who wants to add it to their 1/1000th scale collection of Trek models.

Thanks to Round 2 and IPMS/USA for the review kit.