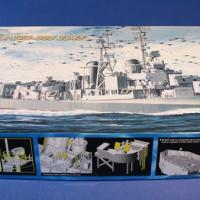 The USS Chevalier was a Gearing Class Destroyer, the second ship to be named after Lcdr. Godfrey De Chevalier (1889-1922), a pioneer of Naval Aviation. She was launched 29 October 1944 at Bath Iron Works, Bath, Maine. She was commissioned 9 January 1945 with Cdr. F. Wolsieffer in Command.

She cleared her trials in June 1945 and reached Pearl Harbor on 9 July 1945. On the 24th she sailed to join the bombardment of Wake Island which occurred on 1 August 1945. Arriving in Eniwetok the next day she joined Task Force 38 (TF38). She sailed the next day for Honshu and arrived on 18 Aug 1945. TF38 entered Tokyo Bay on 26 Aug 1945 to take part in the Surrender of Japan and the end of WWII.

She served in patrol and escort assignments supporting occupation activities in the Marianas and Philippines. She sailed for Saipan on 25 Mar 1946 to detach and sailed for San Diego, arriving on 11 April 1946. She completed several tours of duty in the Western Pacific (Westpac's) and maintained her Readiness though 1949.

On 18 Mar 1949 she was reclassified to a DDR, a Radar Picket Destroyer. She was then transferred to the 7th Fleet based out of Pearl Harbor. During the Korean Conflict she served actively making 3 tours. During this time a major portion of her tour was to provide a protective screen to TF77, a Carrier Force which launched almost continuous raids on North Korea.

After Korea she served with the 7th Fleet making numerous deployments (Westpac's). On 13 July 1962 she was reverted back to a classification of DD (Destroyer).

USS Chevalier was transferred to South Korea on 5 July 1972 and served in the Republic of Korea Navy as the ROKS Chung Buk. She was sold for scrap and dismantled in Dec 2000.

During her career she received one Battle Star for WWII and nine stars for the Korean Conflict.

The kit came well boxed and the parts were in individual bags. Nothing was damaged and parts were still attached to their sprue. There are 23 sprues with 2 being photo etch and 1 clear. There is also a decal sheet with flags and draft markings. No flash was present on any parts and the detail is outstanding. A stand and pedestals are also included making this a VERY COMPLETE kit.

The instructions are a one page affair with the individual assembly sequences called out in a logical order. They are easy to read and follow but beware there are a lot of parts so keep track of what you do. I use a highlighter pen and mark the piece off after I use it.

I followed the assembly sequence with a few exceptions. Mainly while I wait for something to dry I proceed with another assembly.

You start with the weapons. There are 9 parts making up the dual 40 mm mounts, 16 parts for the quad 40 mm mounts and an astonishing 9 parts for the 20 mm mounts. These are a LOT of parts making these very tiny weapons. Be patient and have a good set of needle nose tweezers in your tool selection, a MUST for this model. Also have some CA Debonder available or a wife that will come to your rescue when required. Thank goodness there are some extra pieces because things will fly off in the unknown world of the "Carpet Monster".

You will have to paint the deck before attaching any parts due to the Anti Skid decals that need to be applied. During this painting session I also painted the upper hull, lower hull and many of the bulkheads and details (while still attached to their sprues).

You will have to drill holes in the hull for the mounting pedestals to go in.

The major deviation I made from the assembly sequence is I glued the main deck to the hull near the beginning instead of waiting to the end due to all the small parts and handling of the model.

Now for the negative side of the model: Dragon does not include any hand rails for these kits. I noticed this too with their USS Independence CVL-22 kit. You will have to muster up your own. There are numerous photo etch companies out there that have the correct style that is required. I was lucky and some rails that were correct in my parts stash. Other than that there are no complaints.

I followed Dragons instruction for painting. They are fairly correct and accurate for the time period (WWII). I also used Floating Drydock's excellent reference UNITED STATES NAVY, Camouflage 1, part 1, of the WWII era, as a color guide. Their colors are correct. If you were making a post WWII version then you will have to do some research.

I used Model Masters Enamels for most of the colors. The hull was sprayed with a primer oxide red purchased for $.99 at Wal-Mart. The 5-N Blue for the lower hull was Floquil Marine Colors (no longer available). The deck is 20-B Deck Blue which is Panzer Grey. The Haze Grey color is Neutral Grey.

I replaced the anchor chain with some finer chain I had in the spares. I didn't like the photo etch provided.

I enjoyed the build very much. The directions were direct, logical and fairly easy to follow. The detail is outstanding and very extensive. You even get little dudes to man the rails if you like. No putty or filler was required. No flash was present and no seams to fill or file.

I would recommend the model to those that have experience in handling photo etch and very tiny parts.

Thank you to IPMS USA and Dragon Models for providing the model ship for review and the opportunity to build it. It looks real nice sitting next to my USS Hornet CV-8 and CV-12.