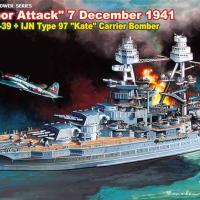 The Arizona was a Pennsylvania-class battleship, for and by the U.S. Navy in the mid-1910’s. The ship was the second and last of the Pennsylvania class of “super dreadnoughts” battleships. The Arizona had an overall length of 608 ft., beam 97 ft, and draft of 29 ft, 3 in. The ship had four direct-drive Parsons steam turbines, each of which drove four 12 ft. 5 in. diameter propellers. The Arizona’s designed speed was 21 knots. The Arizona carried 12 .45 caliber 14 in. guns in four triple gun turrets. The Arizona took part in several exercises, escorted President Woodrow Wilson to the Paris Peace Conference, was regularly used for training exercises, assisted in the Long Beach earthquake of 1933 with disaster relief, and was featured in the Jimmy Cagney film Here Comes the Navy.

During the Japanese attack on Pearl Harbor on Dec. 7th, l941, the Arizona was destroyed and sunk, killing 1,177 officers and crewmen. The Arizona could not be fully salvaged, although the Navy removed parts of the ship for reuse. The wreck still lies at the bottom of Pearl Harbor and the U.S.S. Arizona Memorial was dedicated on May 30, 1962, commemorating all those who died on that infamous day.

The model is made from injection molded plastic, gray in color. Plans were made up of a fold-out form, printed on both sides. Photo etch and a decal sheet were also in the kit.

(Note: This kit was a takeover from another reviewer.) The decks were already in place. I added the main deck hardware, guns (small), hose reels, lifeboats, cranes, catapult, anchor, and chain. The chain added was pre-finished in black (not part of the kit). The original chain was copper in color. Pre-painting was also done at this time, while adding the details. The deck railing was added as well (very difficult).

Superstructure: The superstructure was pre-assembled, adding small guns, searchlights, railing, stairs, and masts. For the mast supports, I used brass wire instead of the plastic rods supplied in the kit. These assemblies were pre-painted and added to the ship.

I used ModelMaster gunship gray and browns. The decals went on well. The final finish was sprayed with Testors Dulcote.

The kit was difficult to assemble, as there were many tiny parts. The build is for the more experienced builder. Note: the base (wooden platform) was not part of the kit. I would like to thank IPMS and Dragon for allowing me to build and review this kit.